Yunica (codenamed Sea Wasp) is an antagonist, later an ally in Gravity Rush and Gravity Rush 2. She is a former member of the disbanded Jellyfish special forces that patrolled and protected the city of Hekseville, as well as the disbanded Rebels. Her commander is Yuri Gerneaux, and she is considered second in command due to her skill. Dressed in military regulation gear, her right hand transforms into a lance, and she uses a jet pack to quickly traverse the skies.

She first appears obscured by a cape, alongside her commander Yuri Gerneaux as they both witnessed the fight between Kat and Alias. She briefly appears again in her cape attire when Yuri thanks Kat for defending Endestria. Yuri, seeing a chance to increase the army's ranks, praises Kat's skills and offers her a chance to join the Special Defense Force, but Yunica balks at the suggestion.

One year later, as Kat is being pursued by Nushi up from Boutoume, the reformed Special Forces appears, with a caped Yunica on the bow of the Jellyfish battleship. Removing her cape, she quickly dispatches Nushi by crushing the giant Nevi's orb. Alongside Yuri on the bridge of the Jellyfish, they inform Kat of what's happened in her year absence. Yunica accuses Kat of being a troublemaker, noting this is the second time she has brought Nevi into Hekseville and suggesting she should leave.

When D'nelica's new weapon against the Nevi, the Sea Anemone, is revealed, Yunica appears and begins a battle with Kat. Yunica states that Kat is under arrest under Provision 113 of the Anti-Nevi Act and is no longer required. Their battle takes to the sky of Vendecentre, where Kat forces Yunica to increase the output of her weapons by 121%, breaching safety regulations. After Kat unleashes a finisher on the soldier, she crash lands on a walkway, but when Kat approaches, Yunica activates a suction device that separates Dusty from Kat, stripping Kat of her powers. Kat is captured and frozen, and Yunica proclaims that her mission has been accomplished.

Syd, who has been observing from a distance, shoots the engines of the machine carrying Kat. Yunica whirls on Syd, aiming her lance at him and proclaiming he has just committed treason. Just as this happens, however, the Sea Anemone begins to go beserk, malfunctioning and attacking the Special Forces ships and Vendecentre. In the carnage, it destroys the Jellyfish. Shocked, Yunica engages the Sea Anemone in combat and is nearly killed, until the newly freed Kat comes to her rescue. Yunica proclaims defiantly that it is her duty to destroy the Sea Anemone, as the Jellyfish's destruction means she is now at the top of the chain of command, but Kat tells her that she's in no condition to fight. After Kat makes several futile attempts to damage the Sea Anemone, Yunica transforms her lance into a cannon. She fires a blast at the Sea Anemone and exposes the Nevi core, but she collapses due to her injuries.

Repairing herself after a few minutes, she re-engages the Sea Anemone with Kat and the reappeared Raven. After a fierce battle, Yunica pins the Sea Anemone to the Clock Tower with her lance, holding it in place as Kat unleashes one last finisher and destroys the Nevi abomination once and for all.

During the credits sequence, she is seen with an injured Yuri overlooking the skyline of Vendecentre. As she advises Yuri to return to bed for rest, he laments that this is the calm before the storm.

Yunica is a member of the Rebels, led by D'nelica, who are attempting to overthrow Dr. Brahman. She first appears when Kat attacks a Rebel spy at the bidding of Dr. Brahman, and she battles Kat alongside Permet as the Rebels Delta-1 and Delta-2. When she is defeated, she reveals herself (although Kat did seem to recognise voice before hand) and tries to convince Kat that she is on the wrong side.

Later on, she assists Kat in defeating the Angels. However, she attempts to kill Durga Angel in a strictly tactical move that does not take into account that Cecie is Kat's friend, and Kat tries to stop her which results in Yunica and Permet being incapacitated. Kat realizes she has underestimated the Angels' power but is saved in the nick of time by Lisa, who was pulled through a dimensional rift by Alias.

Yunica later assists in the defense of Hekseville against Elektricitie, initially helping Raven take down her electric shield after Permet is incapacitated but is wiped out herself by a bolt of lightning—her robotic legs completely blown off her body. Nevertheless, she survives this attack and is later seen continuing to train even after the Nevi threat is eliminated, in case a new threat emerges.

Yunica can be described as head-strong, yet dedicated, pragmatic, tactical. She is always focused on her mission objectives, and takes her job very seriously. Her main concern is following orders from her superiors, though this has led to Kat questioning this mindset and basically accusing her of being nothing but a mindless drone who can't do anything for herself. She is dedicated to the Jellyfish Squadron, even when the chain of command isn't there. She is very adamant in her decision making, but one might say she's a little brash, as she doesn't take external factors into account; this is best seen when Yunica targets Durga Angel as the bigger threat out of the angels, without even acknowledging that she is actually a friend of Kat's.

One thing to note is that Yunica is visibly shocked when Gerneaux tells Kat her real name, which implies that she is possibly embarrassed by that name. She would much rather be addressed by her codename: Sea Wasp.

Yunica is highly skilled in combat. She cannot shift gravity, so she uses a jet pack for mobility. It appears to be built right into her system, implying that she is indeed a cyborg. She has two primary weapons: the first is a jousting lance, the other is a cannon. Both of these are mounted on her right arm, and they are interchangable depending on the battle conditions; the lance is used for more direct engagement with foes, and the cannon is of course used as a ranged attack. Yunica can also perform a "repair protocol" in which she can shut down important functions in order to effectively self-heal. Similar to Raven's Blue Jays, Yunica can deploy Stingers, small explosive projectiles that home in on targets.

Outside of Gravity Rush[edit | edit source]

A masked Yunica as she appears in Gravity Rush 2 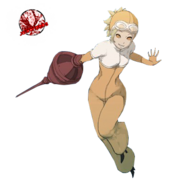 Yunica's Spy Costume (only in Destiny of Spirits)

Yunica alongside with Permet and others.

Add a photo to this gallery
Retrieved from "https://gravityrush.fandom.com/wiki/Yunica?oldid=16722"
Community content is available under CC-BY-SA unless otherwise noted.