Xii is a crow shaped Guardian in Gravity Rush, Gravity Rush 2, and Another Story - Raven's Choice. It belongs to Raven and grants her the ability to shift gravity.

Xii appeared before Raven, Sachya at the time, one day when she was weak and helpless while living on the streets. It helped her survive and granted her the power to shift gravity, leading her to become Raven. This created a major personality shift for the small child, turning her from a sweet, naive girl into a ruthless, sinister, seemingly dark fighter who struck fear into those around her.

Xii first appears after Kat arrives at street level. Dusty chases after the strange crow, leading both him and Kat to its owner: Raven. When Raven appears before Kat after recovering the missing part of Auldnoir, both Xii and Dusty appear to prepare to fight each other until Gade intervenes. Throughout the game, its appearance indicates that Raven is close by.

As with the main story of both games, Xii accompanies Raven on her quest to repair the damage to space-time caused by the Ark. It is revealed that Xii appeared before Sachya when she returned to Hekseville after an accident that sent a school bus over the edge of the city. The Giant Collector is defeated when Xii merges with Dusty and Raven to form a giant Griffin.

In Gravity Rush 2, Xii first appears in Separate Tables, the sixth episode of the game's story, alongside Night Gale who is simply Raven wearing a control mask. Later on, it is perceived to give Raven a questionable look when she lies about losing a small contest between Kat and herself, just to see Kat smiling again. During the Eto chapter, Xii is locked away with Dusty in a small cage in a prison chamber covered in ice. After Syd arrives in Hekseville to stall the Destructive Force, both Dusty and itself merge with Kat to form a giant Sphinx to vanquish The Darkness, and it joins them both at the bottom of Hekseville to seal the evil entity away. However, Xii returns to Hekseville to rejoin her owner, telepathically using Kat's voice to awaken Raven.

Like Dusty and Wolp, it appears to resemble part of the night sky filled with stars. While Dusty takes the shape of a cat, and Wolp takes that of a winged stag, Xii itself takes the shape of a crow. Its gender is currently unknown. Xii's presence gives off an ominous vibe, so much so that Raven is bound to be in the vicinity.

As Raven's guardian, Xii grants her the power to manipulate gravity in a similar manner to the power that Dusty grants Kat. However, it gives Raven several moves that Kat doesn't have, such as forming her own projectiles called Blue Jays, a rapid series of kicks (Blood Talon), and a High Pressure special attack. Xii also allows Raven to make sharper turns mid-flight.

When fully powered, it can turn into a Phoenix and merge with Raven, granting her enhanced speed, mobility, attack power, and health regeneration.

It's shown that Xii's true form is actually the Sphinx Guardian, which was split in half into Xii and Dusty. They have the ability to merge into a new, far more powerful form that can shoot out countless clones of the two smaller Guardians. Its full power is used by Raven to defeat the Giant Collector.

Xii can also use the voice of others to communicate with Raven, as demonstrated when she was able to hear Kat's voice despite the two being apart.

Xii appears in all six episodes of The Ark of Time - Raven's Choice.

Like the first game, Xii makes the same appearances as Raven.

Xii alongside with Raven and others. 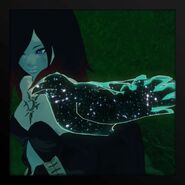 A photo of Xii, perched on Raven's arm.

Xii's dialogue profile in Gravity Rush 2.
Add a photo to this gallery

Retrieved from "https://gravityrush.fandom.com/wiki/Xii?oldid=16305"
Community content is available under CC-BY-SA unless otherwise noted.