Swallow in the Mirror

Kat is given the job of recovering the storage case stolen during the chaos of the inauguration ceremony. To recover the case, she is going to have to face two powerful rebels - both people from Kat's past.

After his inauguration ceremony, Dr. Brahman calls upon Kat to recover a suitcase containing important documents. This would, however, means she would have to venture into the Rebels territory in Endestria. Though Kat found the suitcase, she is ambushed by two high ranking rebels, and is forced to fight them.

After a lengthy fight, and a failed finisher, the rebels reveal themselves to be ex-Jellyfish soldier and bridge commander, Yunica and Permet, respectively. While Kat is initially surprised to see them, Yunica tries to explain her reasons for wanting to bring down the mayor, citing him as a monster. Eventually, Kali shows up to check on Kat to make sure the rebels aren't giving her trouble, and escorts Kat back to Brahman for a second job.

It is here that Brahman's true plans are revealed. He asks Kat to join his cause in bringing Hekseville into a frozen time state in order to preserve the world's beauty. Kat quickly rejects the idea and sees Brahman as a mad man for even suggesting it. He also reveals that he murdered his personal aide, Addica, off-screen when the latter "no longer shared the same vision". Not long after she leaves, Dr. Brahman publicly frames Kat for Addica's murder, labelling her a fugitive, and forcing her to flee from the law...

This episode is broken up into 3 segments: Finding the Storage Case, Chasing the Rebel, and Fighting Yunica & Permet

You will be tasked with finding the storage case in Endestria with a sensor that Addica gives you. This sensor detects the material in the storage case whenever you are facing it. All you have to do is to move the camera (right analogue stick) around until you hear buzzing sounds and the "Signature Reaction" bar starts to rise. Then, a navigation marker will appear and you will go to that area. There are decoys that give signals planted throughout Endestria and you will destroy those decoys as instructed by Addica.

This is the last segment of the episode and it is hard. Yunica and Permet are in the air and you'll have to dodge their powerful projectiles. The easiest way to approach this battle is to focus on one at a time, if possible. For attacking, refrain from using the Gravity Kick as their shields can hurt you and getting close to them makes it easier for them to land projectile strikes on you. Instead, go on the ground, use the Stasis Field, go back up in the air, and throw objects at them. Avoid being on the ground as much as possible as their projectiles from above will likely hit you the most in that position. If you're low on HP, there are plenty of healing gems scattered around the roofs.

Once one of their HP gauge is completely gone, you will perform the finisher move (aim the target at one of them and press the touchpad). After that, the episode ends with cutscenes and dialogues and the next episode, Road to Lonely, beginning immediately. 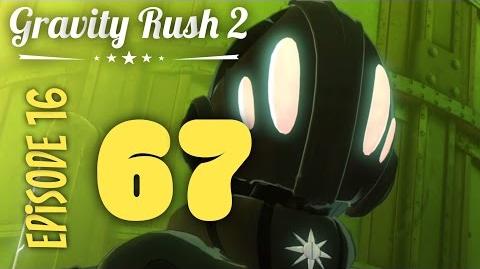