The sudden retreat of the Garrison forces, Raven's alliance with the military - many questions rattled around in Kat's head as she headed to the Banga Settlement for a showdown with Raven.

Wandering Heart is the seventh episode of Gravity Rush 2 and the third episode of the Jirga Para Lhao chapter.

Cecie and Gawan are seen in the Archway plaza staring at the giant monitor, possibly checking out the news of a possible conscription. Kat secretly tells Cecie that she's going to scope out the Bismalia to find out what the Garrison are up to. Despite Cecie's objections, Kat urges her to keep anyone else from knowing about her plan.

On approach, Kat is almost shot out of the sky by the ship's cannons without warning, but is saved by Dusty and taken to one of the terminals in Lei Havina. She hitches a ride on a nearby transporter that is making a delivery to the Bismalia, but she spots the masked Raven leaving just as she arrives. After a chase to the warehouses, Kat corners Raven as she beats up some members of the Angry Centipedes, one of whom informs her that "the black-haired woman" is heading to Banga next.

When they confront each other, it is shown that Raven is indeed under the Garrison's control. After a lengthy fight, Kat uses her finisher technique, slamming Raven into the windmill hard enough to knock the mask off, and thus removing the Garrison's control over her. Though dazed from the impact, Raven is relieved that Kat is alive while the Garrison is angered that her conditioning was broken. As Raven rests for a bit, the Garrison then decide to storm Banga themselves. They are unsuccessful when she joins Kat in pushing them back, and they destroy their mechanical super-weapon, ending with the two girls giving each other a cursory nod in satisfaction with their victory.

Some time later, Raven explains to Kat how she ended up with Garrison after they were separated by the gravity storm that stole them from Hekseville. As Kat reflects on her time with Banga, Raven snuggles right up to Kat and falls asleep, happy to see her friend again. The knowledge that Raven was safe helped Kat have the deepest sleep she has had since arriving in Banga. Lisa allows Raven to stay with the settlement after Syd is able to vouch for her, though she becomes worried about the settlement's expenses after Raven ate the entire meal that was prepared for everyone.

First, follow the gravity gems up to the Bismalia where you'll be stopped in your tracks. Hitch a ride on the freighter nearby to make your way safely onto the giant warship, but at one point you'll need to stand on the freighter's underside to stay hidden from a patrol unit that will escort the freighter. Next, chase Raven until you reach the warehouses, and follow the beaten Angry Centipedes. When you return to Banga, you'll need to fight Raven herself; you can use any of your available powers against her, they all work just as well, but if she uses Stasis, give her a swift gravity kick. Spend some gems to power Kat up if you need to.

You'll then be tasked with fighting off the many waves of Garrison soldiers; it is recommended that you use the Piercing Throw technique to deal with the soldiers quickly. Eventually, Raven will join the fight as an ally. She can take out enemies on her own, but she will also provide assistance when you're dealing with them too, especially the mini-boss against the four-legged mecha. Attack and destroy the generators on the backs of its legs to expose its main power unit. Use the Spiraling Claw to deal massive damage quickly until it retracts. Once its health reaches 0, center the camera on its face and press the DualShock 4 touch pad to finish it off. 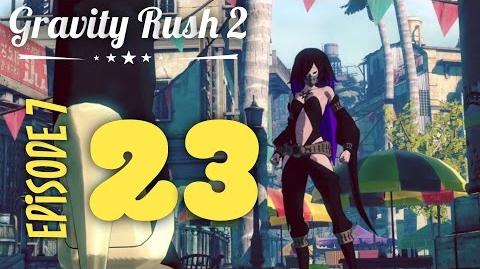 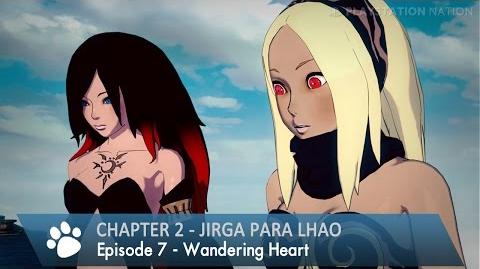