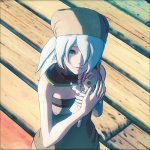 Hi, welcome to Gravity Rush Wiki! I'm a member of FANDOM's Community Support team. Thank you for your edit to Cecie!

It looks as though none of the admins for this community are active right now, but if you need help, check out help pages or stop by Community Central to explore our forums.

You can also follow the Staff blog to keep up-to-date with the latest news and events around Wikia. And don't forget to check out FANDOM University for quick how-to videos.

Please leave me a message if I can help with anything.

No, you're fine. You and LightSage should take a break for a few days now. :)

Raven can only be played during the mining sites (and the mining boat—interact with Misai/Explorer).

Aww, that's disappointing. Even so, I'll check out the mines at some point. Thanks for informing me nonetheless.

Actually... as of currently, the plan is to have a Bosses and Characters in Gravity Rush and Gravity Rush 2. Thinking of deleting the organizations page and instead making it "Factions", which groups like Nevi would fall under...--LightSage 16:27, May 16, 2018 (UTC)

You're doing God's work! As always, I'll help in whatever way I can.

For the Unlock conditions you added to the Talisman page, where were those challenges located? Since you didn't mention location in the edit.

(Signature required.) I don't think you caught it last time I told you, but all 20 challenges in Gravity Rush 2 have the talismans rewards located above the gold medal, both before or after the challenge is complete.--LightSage 03:55, June 16, 2018 (UTC)

Wait, I just thought of something - we've never needed to give locations for each of the Challenge missions. I guess just disregard what I asked before.

I think Swazz is aware of it, he just asked about the locations of the challenges, not the talismans themselves. Though it has got me thinking, should each challenge have their own pages? Thunderjaw01 (talk) 08:56, June 16, 2018 (UTC)

Side/Story- For locations, list the locations where the mission takes place, not where it was assigned. Rewards: Put down any reward that is given at the end of them in the mission infoboxes. There will be a page for "Photo items" and "Furniture" as well; the links will just have to be added later.--LightSage 02:16, June 21, 2018 (UTC)

Hello ThunderJaw! It's me, Andrew! Sorry for the super late reply, cause this community or website has changed everything since I love before, and yeah, I was pretty busy & lazy to go back in this community and started playing my video games on Wii U & Xbox 360. XD

You're best dude, ACampos1252 aka Andrew the Cosmic Guardian! ^_^

Hey man, it's been a while! Things have gotten quiet again these past couple of weeks, and our admin (LightSage) seems to have disappeared all of a sudden. As for me, I've been doing some small edits here and there.

Plus, I not long ago discovered a wiki for great characters in fiction, and made some pages for Kat, Raven, and Syd over there. If you get a moment, here's a link to them.

Anyways, it's good to hear from you again!

Everything's fine. I've just taken a break after finishing the Delvool Trench Mine walkthrough and Talismans encyclopedia. Those were my primary goals on the site. I'll definitely check back every once in a while and see if something needs updating, but right now I'm in vacation mode.

Hello!! I see that you also like Gravity Rush. Well I am a female who's in love with the series and was wondering if you wanted to begin a roleplay with me because I can't find anyone else who is into the games. :( I've played both 1 & 2 of the Gravity Rush games and know a lot of the characters :) AJGluskin (talk) 06:23, March 1, 2019 (UTC)

Does anyone RP Gravity Rush?

What do you mean by "role play"?

I, too, would like to know what this "role play" entails.

It's Edmond and I wanted to stop by and say hi. I've been making a lot of contributions on this page lately and it's good know that I have a community mate who is doing the same thing! It means I'm not alone here as this page is quite slow. I enjoyed reading through your edits and I hope you'll read some of mines. The first page I ever edited here was Two Angels (on April 1), but I've been populating pages of episodes from the first Gravity Rush game. It has been fun! I hope to see you around and about in this page even more!

Re: About the Official Art BookEdit

Unfortunately, the art book is only written in Japanese (but has some English parts). I don't speak Japanese fluently but I can understand parts of the book mainly because I can read the Kanji and Katakana. You can check out the preview of it on the video I attached on the page (YouTube) I'd be more than happy to send you a copy of the book if you're interested. It's a really nice book and I want to have it as a physical copy, but it costs almost as much as a physical US copy of Gravity Rush Remastered!

It's also very nice that you're adding a lot of pages to this wikia! Let's make it to 300!

Yeah, $60.99! I don't know what that is in GB pounds, but that's still pricey; I can get a copy of Days Gone for that kind of price! Also, I reckon the series could work well as an anime; I mean, we already have a 2 episode OVA that is entertaining to watch, why not do more, right?

Even though I don't watch anime, I would definitely watch one that is made for Gravity Rush!

I have sent you a message on crappy games wiki but i am not sure if you got it but this is something i would really like you to do as a friend to give your final peace.

Yup, it's been a year ago since I was gone in this Fandom Wiki. ;)

Even though the series is still cool, but needs more. I kept thinking about Kat (Raven as DLC Echo Fighter) should and will be the last DLC character in Super Smash Bros Ultimate, cause that will be amazing. Also, if they added those two Gravity Rush games on Switch, after Kat was announced in Smash, that'll be awesome. But that's probably impossible, since Sony Interactive Entertainment and Japan Studio are only for making PlayStation games. But if they became a third party company to Nintendo, that'll be a freaking hype! ;D

Anyway, how's Cecie? Is she doing alright as cutie adorable? ^^

Hello. I am here just to give thanks for your efforts while providing some content to this wiki. I feel ashamed by not playing Gravity Rush 2 when it came out back in 2017. I followed the series when it released for the PSVita back in 2012, and sadly didn't see the second game releasing. I think some did a terrible job with the marketing of the first game, aside from forcing Studio Japan to release it for the Vita with barely two years of development. It is worse for the second, I can't believe they decided to release it next to Nier Automata and Zelda Breath of the Wild (I know it is more than a month and half between the releases).

I have hopes that the franchise is kept alive and have a new game released for the Playstation 5. I may have heard something in those lines at the Gravity Rush Central page.

I'm not an avid user of Fandom, but I'm here just to tell you that your efforts are not in vain. Thanks for your hard work.

Retrieved from "https://gravityrush.fandom.com/wiki/User_talk:Thunderjaw01?oldid=16213"
Community content is available under CC-BY-SA unless otherwise noted.