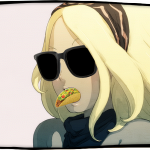 Hey thanks for all that editings, I'm a huge fan of Gravity Rush too! ^.^

Also, I'm kinda a little bit disappointed why you or any editors always keep changing back to the Gravity Rush Yunica, instead of Gravity Rush 2 Yunica. But that's alright.

Oh, and you're awesome that you could find some rarest characters image, where can I find those, please? ^-^

Hi there ACampos! :) Thanks for reaching out—this is my first time really doing any substantial wiki work, so let me know if there's anything I should do differently going forward (or if there's something I do wrong—I'm very open to criticism, haha).

I see your point about the Yunica thing, but I actually had it semi-spoiled for me myself by browsing the wiki and seeing her GR2 picture before I had made it that far in the game. I suppose that's my own fault—wikis do tend to get pretty spoilerific—but I thought it might be good to put it a bit further down the page to avoid spoiling it for other people. Think that's all right? (Also, to be fair, it's not like it's particularly hard to figure out who she is from the time you see her in the game, even before she takes her helmet off...so I suppose it's nothing major :p )

As for the images, do you mean the dialogue portraits? I'm actually ripping them from the game myself! I have some 4K footage of the game that I'm going through and screenshotting the dialogue portraits one-by-one, and then cropping them into PNGs using Photoshop. It's pretty tedious, but I'll get there eventually. As for some of the other contributions I've made (Zaza/Cyanea's artwork etc), I'm stitching those together from the art that can be found in Gravity Rush Remastered's gallery feature. Also takes a while, but I should be able to get more stuff done as time goes on. (I'm a graphic designer by day, so this kind of thing is my bag.)

Retrieved from "https://gravityrush.fandom.com/wiki/User_talk:MistaTweex?oldid=9902"
Community content is available under CC-BY-SA unless otherwise noted.