A swarm of Collectors suddenly invade Hekseville with one goal: to destroy the Ark. While the Ark is restarting, Raven tries to protect it from the Collectors before they destroy it. Though she is able to hold them off, another swarm merges together into one giant entity. Raven is able to keep it away from the Ark by destroying cores all over its body when Bit intervenes and instructs Raven to head over to where Kat is so that Dusty can help defeat the Giant Collector. She lures the beast over to the train station (though not without keeping the Collector fixated on her), but there's a new problem: the Collectors attempt to purge Kat from the world. Raven successfully prevents that from happening, and she uses the combined power from Dusty and Xii to transform into the Sphinx (the top half at least) to summon countless cats and crows to destroy the Giant Collector for good. With that done, the Ark is ready, and Raven uses it to get back to the Labyrinth, while it then goes back to its resting place.

Back at the Labyrinth, Raven has to correct one last thing. Bit informs her that the bus accident needs to be prevented in order to finish the repairs to the universe. But something else needs to go as well: Sachya. Since Raven was never meant to be born as Sachya, she will need to forget her childhood memories, including Zaza. Raven accepts this decision without hesitation, since she doesn't want the lost children to live a life of suffering. She catches the bus and history is rewritten as a result.

Raven awakens to a rewritten timeline, but she feels a great deal of sadness for reasons she can't explain when Kat takes notice. She then meets a pair of children when the little girl drops a bunch of flowers nearby. These two kids introduce themselves to Raven as Zaza and Sachya, the former was named after his grandfather (the same Zaza that Raven had to forget), and the latter was named after her grandfather's imaginary friend (since Sachya no longer exists). As the children leave, Kat notices Raven is acting strange. Kat asks if she's okay when she sees a tear in Raven's eye, though she insists that she's fine.

Before the credits roll, the question that Bit posed at the beginning of the story arc is repeated, to which Raven simply answers: "Everything!"

Your objective is to protect the Ark at all costs from the Collectors. Prioritize the one's that are actively attacking the Ark, and use all of Raven's abilities to keep them at bay. Eventually, the Giant Collector will start to damage the Ark. By this point, Phoenix Mode should become available to use; activate it immediately to destroy its cores quickly. Next, lure the Giant Collector over to where Kat is located. The Giant Collector will try to go back to the Ark along the way, but one swift kick is enough to bring it back on track. You will then have a minute and a half to wipe out all the "small fry" before Kat is removed from existence. You can do this very quickly if Raven's High Pressure attack is fully charged. Raven will then go into Phoenix Mode, all you need to do is get closer and press the touch pad to finish off the beast. This is the last thing you'll do in the DLC, since the last part in which you must catch the bus is completely automated.

The "Furious Collector" trophy is unlocked if you managed to keep the Giant Collector's attention on you throughout the chase to the train station. 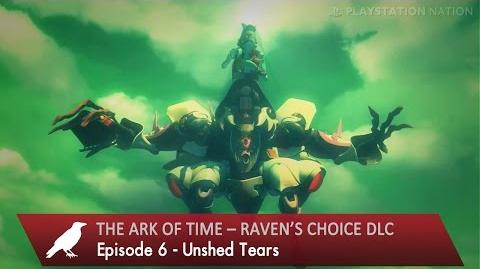 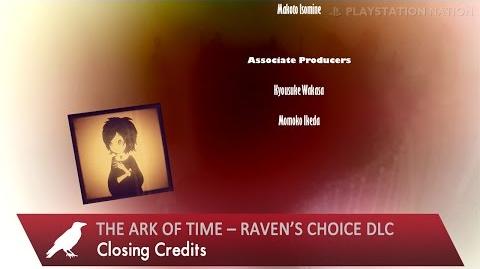 The Ark of Time – Raven’s Choice DLC - Closing Credits
Add a photo to this gallery
Retrieved from "https://gravityrush.fandom.com/wiki/Unshed_Tears?oldid=14993"
Community content is available under CC-BY-SA unless otherwise noted.