Unable to stand by and let Vogo get away with his scheme, Kat takes off through a gravity storm, deep into the Forbidden Land, where no miner dares go. Giant plants grew over the strange, yet beautiful land where Kat was hoping to find the precious ore Banga needed.

Trial and Passage is the third episode of Gravity Rush 2 and the Banga Settlement chapter. It is also Kat's first visit to a Rift Plane in this game.

Kat enters Lisa's boathouse to a revolting smell of low quality alcohol, which Lisa is consuming over the debt Banga is in. Kat suggests getting some ore from the "Forbidden Land". Though Lisa is initially hesitant about sending her workers into the place, Kat reassures her that she doesn't have to.

Upon entering the mining site, Kat comments that the place is not as scary or unsettling as she was expecting. She spots one of the stone tablets that Syd mentioned, and follows the instructions inscribed on it. After completing a series of trials provided by the stone tablets, Kat comes across a large crop of ore with a massive one for the taking. But to her shock, the giant ore was a Nevi-core disguised as ore. When she defeats the creature, it is reduced to a pile of high grade ore, which is just what Kat needed.

When she takes the haul to Vogo, he reluctantly signs the contract, still baffled the Banga recovered such high quality ore. With a smug look on her face, Kat says that the source will be Banga's secret.

Your main goal during this episode is to collect Precious Gems to pay off Banga settlement's debts to Vogo Sun, and to do that you'll take on challenges bestowed by a series of tablets you'll find in the mining site.

Immediately you'll find the first tablet, which tells you to defeat all of your enemies to reveal the way forward. Time to fight some Nevi! After you defeat the two that show up, a new path will open up, so follow it.

The next tablet will task you with mining all of the ore in the area. Do that (taking out any Nevi as necessary), then move on to the next area.

The third tablet tasks you with defeating your enemies without shifting, so you'll have to rely on stasis fields and projectiles to take out the airborne Nevi that appear. After you kill a few of them, you'll be prompted to use one of Kat's new powers: Piercing Throw. Hold circle when holding objects in stasis to use some energy in your new SP Gauge, which will hurtle your projectiles outward, piercing weaker enemies and seeking out new ones to destroy. Use this new move to defeat the rest of the Nevi that appear, collect the Precious Gems in the area if you want, and then follow the marker to the next tablet.

The fourth tablet is a little bit more challenging: you have to defeat all the Nevi without succumbing to the toxic mist that hovers at the base of this island. You can use stasis to defeat the enemies below without having to drop down into the mist; for the big Nevi that appears at the end, the trickiest part is taking out the weak point on his hand, which he'll shoot out to grab you. Once you've cleared this part, move on to the new island that appears.

This next tablet's easy: simply pick up seven cacti using stasis, and throw each one at the tablet. Nevi will show up to annoy you, but you can ignore them unless they're in your way.

The sixth tablet's challenge is even easier. You have a limited amount of time to defeat a bunch of Nevi that appear, but the game teaches you how to wipe them all out quickly: by using the Spiraling Claw. Hold triangle to wipe out the first group in a matter of seconds, then refill your SP gauge with the pink SP Gem that appears nearby and do the same thing to wipe out the large Nevi that shows up next. Easy peasy! Move on to the next tablet.

The next tablet is a bit trickier: the island is sinking and you have to collect 30 Precious Gems before that happens. Start at the bottom, but don't worry about collecting every single one while you're down there: if it starts to get cloudy, that's your cue to reach a higher elevation. There should be plenty of gems to collect from the upper level once you've gathered 10-15 from the bottom; if you can't find enough from the upper level to reach 30 total, use stasis to hurl cacti down at the ore on the bottom level from a safe position up top. Then move on to the next tablet.

For the next challenge, you'll need to use a new move, the Gravity Slide, to escape the area. There will be Nevi to fight and cactus to dodge, but just focus on collecting the Precious Gems and blue energy gems if your Gravity Gauge gets too low, and you'll make it out of here in no time.

Finally, you've made it to the end of the Forbidden Land. There's a TON of ore here, totalling more than 300 Precious Gems, so collect all of them before approaching the giant Ore cluster in the middle.

Suprise! That isn't an ore cluster at all: it's a Giant Nevi! Use Gravity Kicks and Gravity Throws to knock out all of its weak spots and its shell will fall off, revealing one more giant weak spot. Wear this down with a few well placed Gravity Kicks and you'll be prompted to use a finishing move. Press the touch bar to take it out, and you're done with this mission!

After a cut scene, you'll be given a tutorial on Talismans, which Kat can equip to obtain a variety of powers. 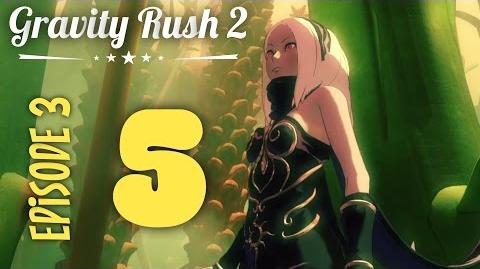 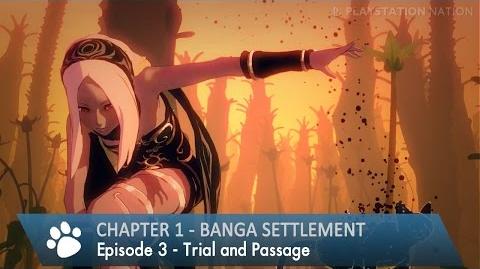 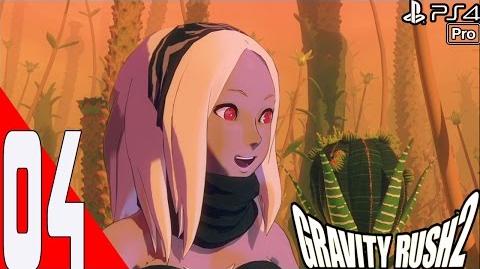 Retrieved from "https://gravityrush.fandom.com/wiki/Trial_and_Passage?oldid=14910"
Community content is available under CC-BY-SA unless otherwise noted.