The Other (ジ・ァザ一)[1], called the Mysterious Woman in-game as a proxy for an unknown identity, is a character in Gravity Rush 2. She is the original entity of Kat and Raven from another dimension who's purpose was to train and unlock Kat and Raven's latent abilities.[2]

The Other was brought by Bit from "another time and place" to Kat's dream so that Kat and Raven could learn something valuable from her. The Other first met Kat when Kat was searching for Raven. After noticing her presence, the Other transformed into her panther mode and extracted and restricted Kat to her lunar style. As the Other took off afterwards, having made Kat's progression through the unidentified place harder, she eventually had her first battle with Kat after she waited for her to catch up. At some point, she forced Kat to her other gravity style—Jupiter style—and then took off, again. The Other soon reappeared as a combative trial for Kat from a stone tablet that Kat had activated shortly after her previous confrontation with the Other. Eventually, the Other endowed some of her power to Kat so that she could access the panther form. Thereafter, the Other had one last battle with Kat that involved them fighting each other in their panther forms, but the Other was soon defeated and then vanished after the combined efforts of Kat and Raven against her in their panther and phoenix form, respectively.

While the Other shares most aesthetic features with Kat, she also has some unique physical traits that differentiates her from Kat.

The Other is a female human with medium-pale skin, medium length black hair, and red eyes. Her attire consist of a headband that rest atop her head, a long scarf that reaches slightly past her backside, a sleeveless and strapless red romper with an upwards pointed neckline, detached sleeves covering her whole forearms, and a pair of close-toe mules with a moderate heel. In addition, the Other wears yellow gold accessories attached to her headband, one on both of her shoulders, two encircling both of her detached sleeves, multiple covering her clothing including a sun-like piece on the navel area, one semi-long or two swirling around both of her thighs, and two encircling both of her socks.

As a gravity shifter, the Other's primary abilities involve gravity manipulation. She can perform the most common gravity technique, the gravity kick, which she used against Kat in their first and second battle. Additionally, the Other's gravity kick is the exact same as Kat's, as in she performs a narrow, directed singular kick but with a slight spin.

The Other can also use stasis field, which she has four versions of: normal, charged, debris ball and charged-up debris ball. The normal version acts similar to Kat's and Raven's stasis field attack in that she attracts objects from the environment and hurls them forward, which she used against Kat in her first battle with her and could use in her last battle with her. The charged-up version has a slightly longer start up but does not seem to have any other secondary effects, making it appear as just an aesthetic variation. The regular debris ball is small just like Kat's regular version in her Jupiter style, but the Other's charged up version is massive and bigger than Kat's charged up version.

She also possess the ability to manipulate stone tablets, which was seen when she had control over and bestowed a tablet's challenge to Kat that involved disabling her ability to shift gravity, while the Other was unaffected by the restrictions.

The Other also has the power to change and lock Kat's gravity styles at will, which was shown when she extorted and restricted Kat to both her lunar style and Jupiter style at two separate times, and proven when Kat was unable to change styles.

She is also capable of using long-range energy projectile attacks, baring close resemblance to Raven's blue jays, which she used two harmless versions of on Kat to change her gravity styles.

The Other has access to her own Panther mode as well, which she had already mastered and can use at will. It was in this state that she manipulated Kat's gravity styles as well as fought against Kat and Raven in their panther form and phoenix form, respectively.

Her physical capabilities are also prominent; she is agile in the air, capable of making swift, immediate turns (similar to Raven), and can perform a series of strong standard kicks. 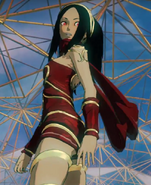 The Other during a cutscene.

The Other shifting gravity.
Add a photo to this gallery

Retrieved from "https://gravityrush.fandom.com/wiki/The_Other?oldid=16111"
Community content is available under CC-BY-SA unless otherwise noted.