A Meeting with Destiny

Home - check. Interior design - check. It was time to leave the neighborhood and try exploring a bit. I needed to get around and start talking to the people of the city.

The Hekseville Phantom is the fourth episode in Gravity Rush. Minor characters Chaz and Bulbosa are introduced in this episode, along with Kat's nemesis, Alias.

Kat spots Syd on the pathway connected to the island with the Karuwari Church, donning a snazzy coat; Syd reveals that he was promoted to a detective (thanks to Kat's actions rather than his own), but he asks for her help with protecting Auldnoir's Sacred Gem from the criminal mastermind known as Alias. Before he can explain his plan to her, he is pulled aside by his boss, Bulbosa, the Chief of Police, who is joined by his co-worker, Chaz.

Syd radios Kat to brief her on his plan: grab the fake gem that he made and put on the roof of the church, without being detected by the police patrolling the area. Still under cover, she manages to swap the gems, then she brings the real gem to the garden at the opposite end of the island where Syd is waiting.

After Kat hands the gem over, she notices Syd acting strange, only to reveal himself to be Alias. Before she can say or do anything, Alias vanishes, and the real Syd crawls out from a hedge. Unsure of what happened to him, Kat confesses that she gave the gem to Alias without realizing it.

Suddenly, they hear commotion over at the fish statue to find the guards have been knocked out and the area swarming with Nevi. With the Nevi soon eradicated, Kat is confronted by Bulbosa and as she tries to explain what happened, she looks over to see the gem had been shattered. Syd gets his boss to eat a piece of the fake gem, with him realizing it was made of candy. Bulbosa attempts to arrest Kat under suspicion that she is in league with Alias, but Chaz is quick to point out that Kat is completely innocent, as she would not have fought the Nevi if she was and that she would have fled by now. When other onlookers take her side, the police sets out to find Alias, and Kat is grateful to the residents that rallied behind her.

Meanwhile, Alias is seen standing on the New Stormshield Tower in Endestria, with some chilling words for Kat, hinting that they will meet again.

The first two phases of the episode are stealth oriented. If you get too close to a police officer, the Alert indicator will increase until you back off; if it reaches 100, you will fail and will have to start again. You will fail instantly if you are spotted by any of the patrol boats overhead.

First objective is to take the fake gem from the roof of Kaurwari Church. The garden in front of it are heavily guarded though, so you will need to find another way to your destination. Use your gravity powers to run along the outer walls of the island until you reach the back of the church (following the Gravity Gems); when you arrive, Kat will say that she can climb up to the church. Go onto the roof to find the fake gem, where the next phase of Syd's plan will begin.

Before you take control again, security will increase, but the camera will pan downwards and to the right, highlighting where you need to go. Avoid shifting as you leave the roof of the church, and once again use the outer walls to make your way over to the garden at the other end of the island.

After the cutscene, head back to the fish statue, and fight off the Nevi surrounding the area. You will get a tutorial tip on using Stasis Field to defeat airborne enemies.

Upon finishing the episode, Kat's reputation will increase, in turn raising her level cap and allowing her powers to be upgraded further. 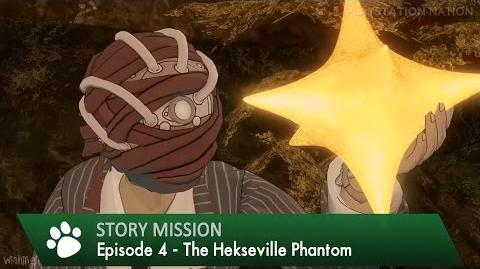 Gravity Rush Remastered - Walkthrough - Episode 4 - The Hekseville Phantom
Add a photo to this gallery
Retrieved from "https://gravityrush.fandom.com/wiki/The_Hekseville_Phantom?oldid=15286"
Community content is available under CC-BY-SA unless otherwise noted.