How to Say Goodbye

With a push from Alias, Kat heads up the World Pillar. Raven, who is attuned to Kat's thoughts, follows. Together, they complete the long, arduous journey to the top and arrive at the palace in the city of Eto.

Unlike all other episodes, this one will only become available once Kat finds and talks to the Shining Girl who appears throughout Hekseville. The episode begins when Kat speaks to her as she looks over the island with the Karuwari Church. The following is a list on talking points that unlock the next episode (in no particular order).

As Kat talks to the Shining Girl, she is lifted into the air to see a part of Auldnoir be consumed by the dark void from the bottom of the world. Alias then appears before her and tells her that in order to save the world she will have to travel to the realm above and face her past. As Kat sets off, Raven catches up and decides to join Kat on her journey to the top of the world.

The two find their progress halted by gravity storms above them, so they venture inside the World Pillar, where they discover the mysterious tablets with cryptic instructions inscribed on them. They also discover that their powers are weakened as long as they remain inside the pillar, but also that they are able to shift endlessly outside. As they travel upwards, they wonder what awaits them at the top but engage in some light-hearted banter as well, with Raven even dryly responding with "Maybe I've finally grown used to your talking" when Kat notices how much she actually enjoys her company.

They eventually reach the top where they are greeted by an attendant, who takes them to a yet-unseen location. On the way, Kat and Raven spot some strange white-coloured Nevi that are not attacking. The attendant informs them that they are docile and do not normally attack unless provoked or ordered to. Soon. Kat and Raven arrive at a castle and head inside. They are wary but are greeted by the kingdom's ruler, a small boy named Cai, the king of Eto, and the Royal Senate, Xicero. Before they can say or do anything however, the scene fades to a bright light...

Before starting the episode, you need to talk to the Shining Girl in each of Hekseville's four districts:

Note: Make sure you have done everything you need to do before starting this episode, be it Challenge or Side missions. Once you complete this episode, you will be locked into the remainder of the story, and won't be able to retire from them.

First, make your way up the pillar until you reach the first gravity storm. You will need to head inside when you reach the storms, and then follow the instructions that are given by the ever familiar stone tablets. Each challenge you complete will clear the Gravity Storm ahead, thus allowing you to progress.

You will need to clear the way upwards by kicking the air vents open on the walls of the pillar that will allow air in to push the debris up and clear a path for you. However, your powers are weakened significantly during this challenge, so you'll want to lighten Kat with Lunar mode, and use the Spring Jump technique to climb. Once you find the exit, head outside and continue up the pillar until you reach another Gravity Storm. You will also notice as you exit that you are able to shift much longer than normal, which both Kat and Raven will notice and comment about.

The second and third tablets will involve fighting Nevi. They all have blue tinted skin, hinting that they are stronger than regular Nevi, but there is a another Nevi to watch out for: parasites. These will infest other Nevi to not only strengthen them further, but also act as additional armour for them. They will continuously respawn until you destroy their nests.

The first of the two rooms will have you fight a bunch of the Are and Jiu Nevi, a Defnete, and a parasite nest. The first you'll want to do is get rid of the parasites by destroying their nest. The Are will lunge at you if you're far enough away from them, so keep you wits about you when you're on the ground. The Jiu will fire two energy balls at you, and they have homing properties as well, but you can use Stasis to deflect these shots if you have upgraded the attack enough. The Defnete won't pose that much of a threat to you if you keep your distance.

The second room has more Are, plus some Mosui, a Giacago, and two parasite nests. Again, dispose of the two parasite nests before fighting anything else to prevent unnecessary difficulties while completing the task. Once the nests are gone, use Lunar style to take out the Mosui first since they are the bigger threat than the Are, due to being faster and far more aggressive. Defeat the Are that are on the ground, and then you can focus all of your attention on the remaining Giacago.

The last tablet will stop time inside the pillar, allowing you to get past the falling stalactites. You will have a limited time before the flow of time is restored, so use Jupiter style to fall faster; quickly switch to lunar style when your energy runs out to soften the fall, and then switch back to Jupiter style when it recovers. You'll reach the halfway point when time flows normally again, and you'll need to interact with a second tablet to stop the flow of time again, though Minaye type Nevi now appear and will attempt to impede your progress. Keep going until you reach the top, where the guiding hands will show you the rest of the way up. Once you get to the top of the pillar, a cutscene will start, after which the remainder of this episode will be a simple boat ride to a castle. 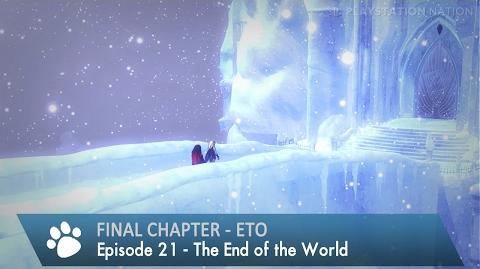 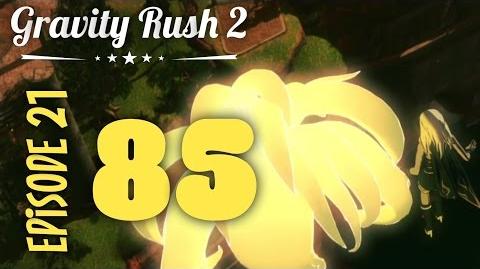 Gravity Rush 2 Part 85 Episode 21 The End of the World
Add a photo to this gallery
Retrieved from "https://gravityrush.fandom.com/wiki/The_End_of_the_World?oldid=16266"
Community content is available under CC-BY-SA unless otherwise noted.