The Lost City begins its attacks on Jirga Para Lhao. Lisa is hesitant to risk her own airboat fleet in defense of the wealthy citizens, but relents with some prodding from Kat, who takes off with Raven amidst the chaos to protect Jirga Para Lhao from the Lost City.

The Crowd is the eleventh episode of Gravity Rush 2, and the penultimate episode of the Jirga Para Lhao chapter.

Kat attends the public forum in Lei Havina, but all she finds are arguments between the rich and the poor, which Lisa is visibly struggling to calm. Meanwhile, the Council contemplate how to take Lisa down when all of a sudden, the lost city appears and reduces Dourwa Hiraleon to rubble.

As the town erupts into panicked chaos, Kat's and Lisa's ideals once again clash; Lisa is thinking about the city as a whole, but Kat is thinking of the people's safety. Kat and Raven head to a mansion in Lei Havina to save a man's family up there. However, what they end up finding there is a note stating that they are evacuating. As the living city consumes the district, Syd and Cecie arrive on an airboat carrying bombs. Cecie suggests using the bombs to blow the bridges out to separate the islands in an effort to slow down the rate of destruction. Kat eventually destroys the bridge, but accidentally leaves a small child is trapped on the island near the theatre. Kat rescues the child just before the theatre is consumed by the Lost City.

Soon, Lisa arrives to lend support after coming to the realization that social classes are irrelevant in an emergency, thanks to some prodding from Kat. As Lisa helps to evacuate Lei Havina, Kat and Raven try to stop the Lost City from destroying any more of the town. Eventually its arms are removed, causing it to fall dormant.

While the shifters were fighting the giant monstrosity, Cecie had vanished. While Lisa focuses on the safety of Jirga Para Lhao, Syd hatches a plan stop the Lost City. He wants Kat and Raven to head inside it and to destroy the gravity engine. He gives Kat a flare gun for her to fire when she finds the Lost City's monument (a moon with a spear through it) for the Bismalia to fire at. While it is dormant, Kat and Raven head over to find the monument......

Head straight to Lei Havina and find the airboat manned by Syd and Cecie. Use the bombs supplied to destroy the bridge connecting the islands. You need to be quick though, as the bombs will explode in 45 seconds when you pick them up. Do not worry about fighting the Nevi nearby. After that, you will have to rescue a stranded little girl and bring her to safety, but, again, you do not have to worry about fighting the Nevi. When Lisa shows up, you will need to destroy the cores of the Nevi connecting the living city's arms. Also be aware of the gravity storm that the Lost City produces; being consumed by it will result in an instant Game Over.

An easier method is allow Raven to do all the work; she is extremely efficient as an A.I. companion, and she can destroy all of the cores herself. Should you do so yourself, use Lunar style to get multiple kicks in before the flower-like Nevi closes its tentacles (which does damage to you), and be careful of the purple gas expelled from the center. After Syd discusses his plan, go straight over to the Lost City, and the next episode will automatically start as you approach. 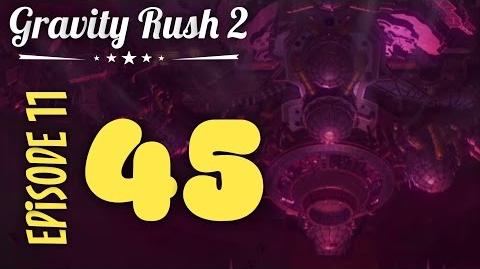 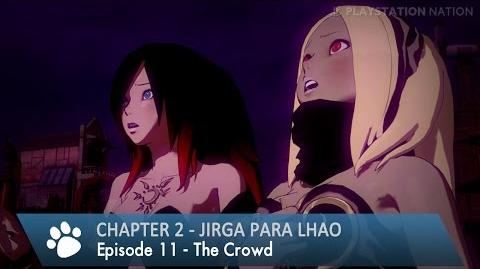 Gravity Rush 2 - Chapter 2 - Episode 11 - The Crowd
Add a photo to this gallery
Retrieved from "https://gravityrush.fandom.com/wiki/The_Crowd?oldid=16207"
Community content is available under CC-BY-SA unless otherwise noted.