Nevi
Police Force
The Snakerabbits was a gang of modified air-boat riders who terrorized Hekseville with their illegal sky-racing, until its dissolution, in Gravity Rush. It was first led by Kish, followed by Kat, who disbanded the gang.

With the Snakerabbits's dangerous and illegal sky races throughout Hekseville, the Police and Syd needed an undercover spy to gather information on them so the gang could be arrested, as the police did not know where their hideout was, who their leader was, or how many of them there were. After a dangerous drive by the gang through Pleajeune, Kat decided to help and trailed one of the gang's members back to their hideout. Once they identified Kat, she tried to convince them and their leader, Kish, that she wanted to be a member of their gang. Kish and Snakerabbits were interested in the idea as they thought having the "Gravity Queen" would ensure nobody would mess with them. Kish decided to test Kat's speed to make sure she was fast enough, and initiated the "Great Snake Race," which was a race from the Pleajeune Station to the Auldnoir Station. Once Kat won that race, the next event was the "Rabbit Run," an ambuscaded drag race which was from Auldnoir to the Ferris wheel in Pleajeune. After beating the undisputed Kish and getting passed the ambush, Kish accepted her as a member of the Snakerabbits. Following the membership, a group of Nevi appeared and Kat saved them, leading Kish to suggest Kat become the new boss. Kat accepted on the term that the Snakerabbits would disband, which they did.

Sooner or later, Kish was approached by Kat and told about the reappearance of Alias, whom Kat's "number one fan" had disguised himself as, and the bombs he had placed around Auldnoir. Following that information, he wanted to help and decided to contact the older members. With the return of the Snakerabbits, they split up around the town to help Kat locate the first bomb. Once one of them found the first bomb, the gang's member contacted Kat and she came to get it. Later when Kish found Kat, she told him that she was going to Endestria to find "Alias," and he offered to take her their quickly. Knowing Kat did not approve of the way the Snakerabbits drive, Kish wanted her to make an exception that one time so that she could save her strength for the confrontation with Alias, and she accepted for just that one time.

The Snakerabbits would only recruit candidates who are fast enough to keep up with them. They would observe a candidate's speed with two types of races: Great Snake Race and Rabbit Run. The Great Snake Race is a race from Pleajeune to the Auldnoir station. Rules included that all of the checkpoints on the course must be passed through and that the racers must stay on course. Rabbit Run, the gang's signature race, is an ambuscaded drag race that involved racing from Auldnoir to Pleajeune's Ferris wheel. Rules are the same as with the Great Snake Race: pass through all checkpoints and stay on course throughout the race. Whether they won or lost, Kish (when he was still leader) would determine the candidates role in the end, as just being fast enough was a minimal requirement.

One of the Snakerabbits's drag racers. 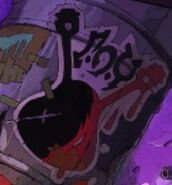 Kish, the original leader of the Snakerabbits.

Add a photo to this gallery
Retrieved from "https://gravityrush.fandom.com/wiki/Snakerabbits?oldid=16127"
Community content is available under CC-BY-SA unless otherwise noted.