Shadows Over the City

I named the cat Dusty, but he didn't seem to care for it. I saw a woman flying around with a crow that reminded me of Dusty. I tried to catch up to her, but she just ignored me. Before I could try to catch her again, everything went south. I heard shouting, and when I went down to take a look, there were monsters with red eyeballs attacking a policeman. I took them down, but that cop who let me do all the work ended up getting the credit.

Shadows over the City is the second episode of Gravity Rush. Raven's name is revealed, Dusty is given a name, and Syd and the Nevi are introduced in this episode.

...The girl takes a look at the wanted poster, which reveals the crow girl to be Raven. She continues to demand answers from the policeman she rescued, but he just teases her because of her amnesia (as he knows who she is). Though he is excited about the girl's dilemma, his excitement is cut short when some odd looking black creatures suddenly appear and begin to wreak havoc.

The girl bravely fights them off using her newfound powers, but she is forced to leave to avoid arousing suspicion when the police officer's comrades call for him, which reveals to the girl that his name is Syd. A city employee rushes over to assign the girl to the task of refueling a fountain, thinking she is hired help. She is given a map to help locate the fountain. Her job is simple: Grab ten precious gems, and use seven of them to fuel the nearby furnace that powers the fountain.

Appreciative of her abilities, he offers her a full time position, though she declines as she would rather work part time. Afterwards, she decides it is time a find a place to live, but as she wonders around, she steps into an open manhole and falls into the sewers. Surprisingly, she sees potential in the sewer network and decides to make one of the unused pipes her new home...

After a comic panel, you will get to fight your first Nevi. Just run up to them and push square to attack. You can also swipe across the touchscreen to evade on the PlayStation Vita. Eventually, enemies will appear in the air and on the side of a building; use your shifting power, in this case the Gravity Kick (by pressing R1 + square on PS4, or R + square on Vita), to defeat them. These enemies have glowing cores that act as weak spots, so you'll want to target those.

Keep fighting off the Nevi until another cutscene begins. Afterwards, the city employee will talk to you. He will explain to you how to use the map. You can use any method or route you want to get to the marker point, as the game is open-world. The navigation marker will take you to the town plaza of Auldnoir. Talk to the city employee to proceed with the story, and he will ask you to collect fuel, which is the purple precious gems. Just shift around to collect all the purple gems, and then take them back to the fountain. You should have ten of them. This will unlock your first challenge mission, but these are not part of the main story.

The game will now walk you through how to upgrade your powers using the precious gems. Afterwards, the protagonist says she needs to find a place to rest. Go over to the red icon right on the other side of the fountain. The red icon always indicates the main story mission. Begin the mission, and the next chapter will start. 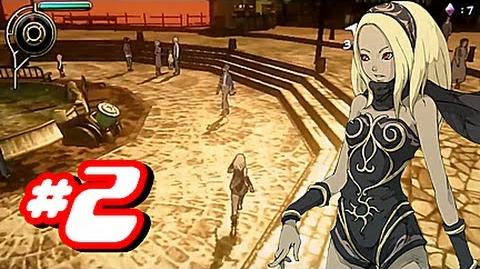 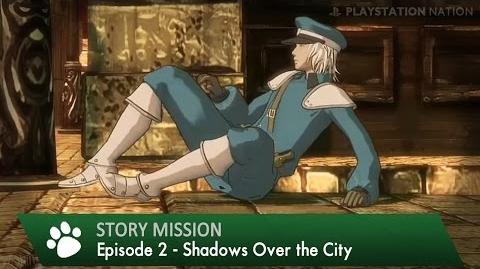 Gravity Rush Remastered - Walkthrough - Episode 2 - Shadows over the City
Add a photo to this gallery
Retrieved from "https://gravityrush.fandom.com/wiki/Shadows_Over_the_City?oldid=15625"
Community content is available under CC-BY-SA unless otherwise noted.