With an introduction from Syd, Kat agrees to take on some work for one of the wealthier women of Jirga Para Lhao. However, this puts Kat face-to-face with the wealth disparity that exists in the city, and, while performing her duties, she discovers a dangerous plot regarding the town where many of the poor live.

Separate Tables is the sixth episode of Gravity Rush 2 and the second episode of the Jirga Para Lhao chapter.

As Kat explores the upper class region of Jirga Para Lhao, Lei Havina, she spots Syd chatting up one of the female residents. After much convincing, he gets Kat to help the woman out. She instructs Kat with the task of handing out invitations to select people. As Kat delivers the invitations, she learns that the people who inhabit Lei Havina are stuck-up, rude, and out of touch (she even gets lip from a little girl). After delivering the invitations to the recipients, though not without having done chores for them, she is then asked by the woman she was handing out invitations for to grab a crate of fuel from the market in Lei Colmosna. Here, she learns how callous the woman is for how much fuel she uses for her parties. At this point, Kat has a choice of whether to deliver the fuel to the woman, or the Angry Centipede.

Whatever she decides, Kat returns to Lei Havina to discover the Garrison have plans to construct an amusement park in Lei Elgona and will be kicking the inhabitants off the land. Horrified, Kat rushes to Banga to warn Lisa about it, but she is still laissez faire about the social divide within the city. Angered, Kat races down to Lei Elgona to extinguish the fires and kick out the Garrison Forces herself; she has one left to deal with, but he brings in their secret weapon: Night Gale, but Kat instantly recognizes her as Raven, albeit with black/purple hair as opposed to red, and an iron mask. Though Kat tries to reunite with her best friend, she is knocked unconscious by Night Gale. But for some reason, the Garrison retreats, thus saving the residents of Lei Elgona. The Angry Centipede takes her back to Banga for treatment for a mild concussion. Lisa reaffirms why Kat should have left things alone, as it could have gotten her killed. As Kat starts to regain consciousness, she mumbles about Raven, to the confusion of Syd.

In her monologue, Kat is disheartened by her unpleasant reunion with Raven was, and doesn't understand why she would try to hurt her.

When you arrive at the first mansion, head down the path away from the mansion itself, and you'll see a woman and her daughter. You'll need to retrieve a balloon for them, which is caught up on one of the spires of the mansion. After you bring the balloon back, and after the conversation, head to the second mansion to find the owner just outside. She will ask you to water her trees for her; use Stasis Field near the pond in front of the mansion to manipulate water, and then throw the suspended bubbles at the trees to water them. Once you've watered all 12 plants and handed over the invitation, head to the island on the other end of the district, and talk to the man on the dock. Head to the lower area, and search it until you see a limo parked down there. You will find the owner of the mansion down there.

Now you need to head to the marketplace and pick up a crate of fuel. Here, you have a choice to make:

Either way though, after some dialogue, flee the area, race over to Banga and talk to Lisa. After another conversation, head down to Lei Elgona and extinguish the fires using the giant water tanks. Fight off the Garrison forces, of which they come in two waves, and 21 in total. You'll be able to eliminate 20 of them before a cutscene activates where you'll be reunited with Raven...sort of. 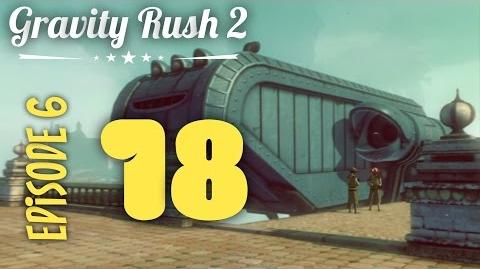 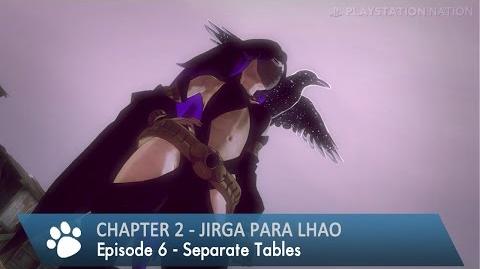