After Kat awakens in Hekseville, she realizes that she needs to find a place to stay. While exploring the Auldnoir district, she falls through a manhole and tumbles into the sewers to which she finds a large pipe that she decides would make a perfect home. She proceeds to furnish and decorate the pipe, turning it into her home. From this point on, the home serves as a spot for the player to save their game, warp to other locations, and change Kat's costumes.

After the events of the first game transpire, Cyanea moves into the pipe house with Kat, where she can frequently be seen nodding off in the chair.

Upon Kat's return to Hekseville, she travels to her pipe house only to discover that it has been filled with garbage and that her old bed is infested with bugs. A police officer arrives and states that since the house is not registered to anyone, she can no longer stay there. Incensed, Kat leaves.

After Kat encounters Dr. Brahman in Episode 14: Carefree Gentleman, she returns to her home to find that her registration has been processed and that Brahman has gifted her with a new bed.

From this point on, the player can use Kat's home as a manhole warp point and as a means to replay previous story missions and side missions. The player can also decorate the house using furniture obtained by completing side missions, challenge missions, or treasure hunts. Kat will additionally receive mail occasionally from other civilians.

Kat and Cyanea in the Pipe House (Gravity Rush Remastered)

Kat in her home (zoomed in) in Gravity Rush 2 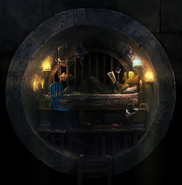 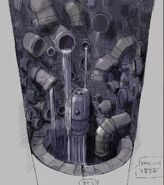 Pipe Junction concept art
Add a photo to this gallery
Retrieved from "https://gravityrush.fandom.com/wiki/Pipe_House?oldid=11576"
Community content is available under CC-BY-SA unless otherwise noted.