Unable to suppress their feelings any longer, a rebellion, led by Lisa, springs up in Jirga Para Lhao. Kat and Raven infiltrate the Council's floating island to free the hostages and to take the fight to the Council, but the Bismalia and its guns stand in their way.

No Messiah, No Message is the tenth episode of Gravity Rush 2 and the sixth episode of the Jirga Para Lhao chapter.

When Kat returns to Banga, she sees Raven waiting for her outside Lisa's boathouse. Raven knows that something is up, but Kat is dragged inside before she can explain what is wrong. Both are shocked to see that Lisa had cut her hair and ditched her coat; she had decided that she will not be pushed around by the corrupt government anymore and plans to revolt against the Council. They plan to break the hostages out of the prison cells they are being contained in at Dourwa Hiraleon, with intel from the soldier that Kat and Raven rescued from the previous mining site.

Meanwhile, in light of the conscription to work the mines, Vogo plans to leave the city, saying that Sun Shipping is done, thus allowing his henchman to do as they please.

In their prison cells, Cecie laments her own lack of emotional strength, but Syd reminds her that strength is something one builds when they have something or someone to fight for.

With the intel given by the soldier, Kat and Raven start with the hostages on the lower level of the prison base, then they work their way up (but not without taking out a pair of guards on the bridge). They discover that Syd and Cecie were moved to the main building for interrogation, so they make their way up the island to find their friends. Though they rescue them, reinforcements arrive and Kat and Raven hold their ground against them, but then Lisa arrives with the mining ship to pick everyone up, including Syd and Cecie. After retreating onto the mining ship, the Bismalia transforms into a battleship and opens fire on the Banga ship with a giant cannon. Fi takes on the ground troops, while Kat tries to stop the cannon from opening fire.

Though Kat's efforts to stop the cannon from firing again are futile, Vogo changes his mind; instead of fleeing, he rams his ship into the Bismalia's control tower, seemingly dying in the process, to Fi's horror. Without hesitation, Kat and Raven head to the main deck to fight off the military and destroy their machines. When the Garrison are defeated, Kat and company liberate Jirga Para Lhao from the Council's corrupt rule, with Lisa reclaiming her tribe's cargo. Though Kat celebrates their victory, she and Raven mourn Vogo's heroic sacrifice. They hear his voice, as if his spirit is talking to them, only to find that he survived the crash by jumping from his ship before impact.

Kat reflects on the events that transpired as well as the city's liberation, but there is a new threat looming over Jirga Para Lhao; at the mining site that had collapsed, the lost city comes to life and fires a beam through the rift-hole, which destroys one of the the military's ships as they try keep the rift-hole open.

First, rescue some of the hostages on the lower levels of the prison by kicking the doors open. Once you're done, follow Raven to the upper levels and take out the guards on the bridge (wait for her to say "Now!" though). After rescuing the remaining hostages, make your way through the island to locate Syd and Cecie.

As before, co-operate with Raven to take out any guards you come across. When you reach the main building, you'll be ambushed by a small army. Keep fighting them until Lisa arrives with the mining ship. Then, you'll need to damage the Bismalia's cannon within 40 seconds (note: this is futile, so don't concern yourself with it too much).

After a cutscene in which Vogo rams his ship into the flying fortress, head onto the deck and fight the Garrison soldiers until an Eliminator is deployed. The best way to defeat it is to kick it in the generators on the mecha's ankles, then use Piercing Throw to do massive damage to the main core on its rear. Midway through the fight, a second Eliminator is deployed. Focus on the first one before taking on the second to minimize the damage you could take, especially since they both pack giant laser cannons. 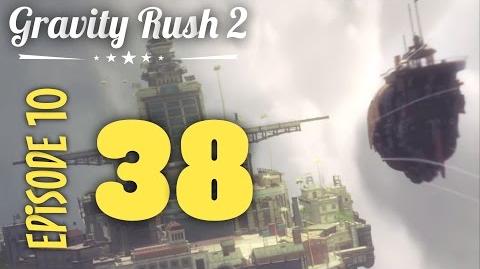 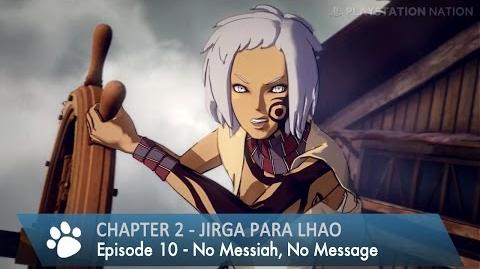 Gravity Rush 2 - Chapter 2 - Episode 10 - No Messiah, No Message
Add a photo to this gallery
Retrieved from "https://gravityrush.fandom.com/wiki/No_Messiah,_No_Message?oldid=15088"
Community content is available under CC-BY-SA unless otherwise noted.