One day, Newt and his classmates laughed at Echo for something she did or said. Not knowing that Newt actually liked her, as he was too scared to admit he liked her around his classmates, this caused her to run off somewhere unknown. He searched for her but could not find here. The next day, he had went to the school uniform store, possibly to see if she had stopped there or would be there.

Having bumped into Kat after coming out the store, nearly knocking her over, Newt caught her and apologized. After flattering and complementing her, he asked her if she could help him find his best friend, Echo. When she accepted, Newt hugged Kat which in turn established a crush she developed for him. Shortly after, Kat and Newt split up to look for Echo. The information he gathered from the locals led him back to the school. Kat eventually caught up, and Newt decided they should split up again, but she convinced him it would be better to look from a high building. When they still could not find Echo, Kat took him to a higher building to search from above which led them to finding a girl name Maye; she was also looking for Echo. Maye told them that she was told that Echo was seen in the abandoned Student Center.

Once Kat and Newt found Echo hiding in the abandoned Student Center, she acted very weird and overprotective of her bag when Newt tried to approach her. Shortly, a Nevi had jumped out of the bag, and to Echo's and the others' surprise, engulfed her from her waist to her feet. After being weakened by Kat, the infested and transformed Echo proclaimed how hurt she was for Newt laughing at her. Once he heard that, Newt ensured her that he was not in-fact laughing at her but that he was laughing because he liked her.

Sooner or later Kat defeated the Nevi infested Echo, and Echo felt remorse after the Nevi disappeared, claiming it was only trying to protect her. Newt then comforted her, telling her that she is not alone anymore—that she has him now—reminding her of how she protected him when he almost fell off a tree and that he missed hanging out with her, not caring what other people thought about them. Following that, he stated to her how it was now his turn to look out for her.

After returning to Hekseville from Boutoume, Newt and Echo are seen in one of Vendecentre's many plazas. They told Kat about the new and forced military training exercises that were part of the school curriculum.

Three years later, Newt is a teacher at Arquebus Academy and married to a pregnant Echo. In "Alone Again", they were seen in front of Pandora's Fortunes wherein they told Kat how Pandora gave their baby a name—it being Alua.

Newt is seen again during the side mission "Forbidden Games" in which he had been working guard duty for the past few days in order to get down to the bottom of suspicious after school activities that students were having and a girl who had dropped out of school. He asked for Kat's help as he knew students would not tell a "teacher" any related details of the events that were happening. He gave Kat a spare uniform that he had. After Kat gathered information on what was going on around the school and informing him about it, they went to Pandora's Fortunes to obtain the whereabouts of the activities. Thereafter, he asked Kat if she could take care of this, as being being seen with Kat would put the students on their guard. Eventually, Kat found the area where the students were having their gatherings, as well as Echo and Newt later on. Newt cleared up the misconception behind "the man's voice" that the students heard in the dark chanting "Choe", and then dismissed them.

Newt's relationship with Kat is rather mutual. At first, Newt was intent on getting Kat to help him find his friend, Echo, even if he had to flirt with her by commenting on how much cuter she is in person. Despite playing with Kat's emotions to get her to help, Newt still views her as a friend, and Kat is supportive of his relationship with Echo years later. They even briefly reminisce on their first meeting when Newt asks Kat to help him track down some students trespassing onto school grounds after hours, showing that they still value each other's friendship.

Echo is Newt's childhood friend and eventually, his wife. Newt has had a tight relationship with Echo ever since they were kids, but wasn't able to tell her how he felt until he and Kat find her in the abandoned student centre. After Kat defeats the Nevi that possessed her, Newt reminds Echo of the scar she got when she saved him from falling out the tree years ago, and from then on, he promises to look out for her. Newt has obviously kept his promise, as by the time Kat returns to Hekseville, he and Echo are married and expecting a child. Even after Echo gives birth to their daughter (whom they named Alua, Kat's real name), Newt still couldn't believe that he and Echo are together. 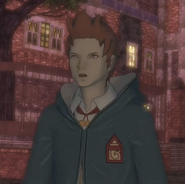 Newt as he appears in-game

Newt reunites with Echo while a saddened Kat departs without saying a word.
Add a photo to this gallery
Retrieved from "https://gravityrush.fandom.com/wiki/Newt?oldid=14850"
Community content is available under CC-BY-SA unless otherwise noted.