The Nevi are a strange race of monsters that are, generally, colored black or white with red cores, but may sometimes be colored black and green. They are the primary antagonists of Gravity Rush. They come out of gravity storms and attack the innocent citizens of Hekseville. Kat and Raven both share a common enemy with the Nevi.

In Gravity Rush 2, it's revealed in Eto that the Light Nevi are usually docile and friendly unless ordered to attack. Alias is seen in Endestria controling the Dark Nevi, and it is later revealed that he did this with some sort of Nevi controlling device.

Nevi are predominantly made up of a black or white gelatinous material that generally retains its form but can sometimes shapeshift. Their eyes glow with a reddish light and appear to govern not just their vision but their consciousness as well.

Nevi can also grow protective shells, but these cannot grow back quickly if destroyed. These shells sometimes hide additional eyes, which further supports the notion that the eyes are where the Nevi's brain is located.

When the eyes are attacked they turn a deeper shade of red. When they are broken, they shatter like glass and any glow that was in them fades.

Nevi have the ability to transport themselves into other dimensions and can appear out of thin air. However, it is possible to attract them to certain locations using some unknown chemical, which can also be used to kill or at least injure them when combined with "Nevi-B-Gone".

Most Nevi have appearances that are humanoid or resemble real-life animals; it's unclear whether the animals they resemble actually exist in the Gravity Rush world or existed at some point.

Dark Nevi tend to mindlessly attack whatever is in the general vicinity. Light Nevi are normally docile unless provoked or ordered to attack by the royalty of Eto.

The level of intelligence demonstrated by the Nevi never goes above that of an animal, with the exception of the Guardians, though this may be because they are guided by their owner's will.

The basic Nevi type, they skitter around on the ground and attack with their whip-like appendage. They appear in this form in Gravity Rush and Gravity Rush: Overture.

In Gravity Rush 2, their appearance is changed and possibly retconned to a more lizard-like one, with the eye in the front instead of on top of their body and the whip changed into a tail.

A type of Nevi that heavily resembles an octopus. It floats around in the air and exclusively shoots projectiles. Its appearance remained unchanged across both games.

A Nevi with frog-like traits that hops around and has an eye on what appears to be its back.

This Nevi was removed entirely from Gravity Rush 2.

A Nevi that has an eye on what appears to be its rear, and charges at enemies using a whip-like appendage it can form into a spear.

Concept art shows that its design used to look like an extremely humanoid, crawling man with a spike on his head, but its arms were removed in the final product. In Gravity Rush 2 it was made even more monstrous, with its entire body besides its legs now comprising a huge, alligator-like mouth.

A mollusk-like Nevi that stays the same in both games.

An insect-like Nevi that stays the same in both games. It's able to fly around using its wings.

A Nevi that looks like a humanoid giant with one arm larger than the other. It can use a short range AOE blast as defense and stretch its one arm out to an extreme degree for aerial attacks. In Gravity Rush 2 it has a protective shell over some of its eyes. 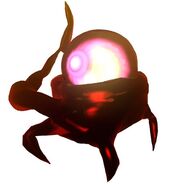 A rare Nevi. Rare Nevi all appear green instead of black and red
Add a photo to this gallery
Retrieved from "https://gravityrush.fandom.com/wiki/Nevi?oldid=10163"
Community content is available under CC-BY-SA unless otherwise noted.