Melda is character in Gravity Rush and one of the wealthiest people in Auldnoir. She was looking for a maid and decided to hire Kat for the position.

She is the wife of a famous writer, but because her husband is always away, she is usually home by herself, leading her to be grumpy and mean.

Kat goes to work for her as a maid, helping her with a couple of task, but later gets caught up in a murder mystery regarding her husband. Melda is blamed for murdering her husband, however, after Kat gets to the bottom of it, it is revealed that her husband never actually died.

Melda and Kat start off on bad terms, as is usually the case with most of Melda's relationships. She is critical about Kat's appearance upon meeting her, and she feels insulted after Kat informs her about wanting the new maid opening. She hires Kat after she passes the interview, but as her boss, she continues to be rude and commanding, until Kat finds her husband's lost manuscripts. After seeing Kat's overall performance and work ethic, she warms up to Kat, expecting big things from her and even thanking her for her assistance.

Melda loves her husband dearly, but with him constantly leaving to gather perspective for his stories, Melda becomes uptight and concerned. When five of his manuscript pages went flying out the window, she showed great concern and asked Kat to please help her get them back. When her husband was gone longer than usual, she filed a missing person's report. After the police told her they were not going to do anything because they thought he left her, she got desperate and went to the fortune teller to find him herself. After taking a cab across the district, she was reunited with her husband and jubilant to see that he was ok. 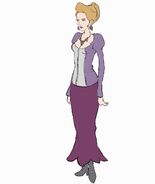 Concept art of Melda.
Add a photo to this gallery
Retrieved from "https://gravityrush.fandom.com/wiki/Melda?oldid=13843"
Community content is available under CC-BY-SA unless otherwise noted.