Gravity Rush Wiki
Register
Don't have an account?
Sign In
in: Antagonists, Characters in Another Story - Raven's Choice, Bosses

Lumino an antagonist in Another Story - Raven's Choice. He is the physical form of the element of light that, along with Tenebria of the darkness, fled to the Rift Plane of Illumina after escaping from the Ark.

When Gade and Cyanea transport Raven to the plane of Illumina, Raven is tasked with summoning the elements of Light and Darkness and harnessing their power to open the Ark. She first summons the light, doing battle with Lumino.

After Raven returns to Hekseville, Lumino and Tenebria are revealed to have tricked the Creators and had stolen their powers, allowing them to manifest in Hekseville itself. They attempt to stop Raven from gathering her lost memories and gaining the power needed to defeat them, but ultimately they are unsuccessful, and Raven destroys their physical forms.

Lumino wields a double-bladed sword of blue energy, with which he shoots projectiles at the player. He typically floats high above the ground, forcing the player to rely on Raven’s Blood Talon or stasis field attacks to deal damage.

Lumino is hot-headed and excitable, relishing the chance to do battle with Raven, even going so far as to thank her at one point for keeping the fight interesting. He enjoys the thrill of combat and seems impressed by Raven’s powers, saying “Who knew humans made for such good sport?”. After the elements of Light and Darkness manifest in Hekseville, Bit asks the two what their end goals are; Lumino states he seeks freedom and proclaims that he “will not be sealed away again.”

Gravity Rush 2: Another Story: The Ark of Time - Raven's Choice[] 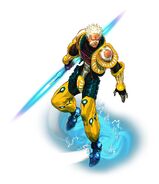