I needed a change of scenery. With the train service back, I really needed to check out that new part of the city. It was time to get out, meet some new people, and have a little fun!

Look Out Below is the twelfth episode of Gravity Rush.

As she explores Vendecentre, Hekseville's capital, Kat approaches a young woman looking over the edge of the city. The woman has a request for Kat: retrieve a letter, which was written to her by her boyfriend, that she dropped below the city. As it was the last thing he wrote to her, thus giving it sentimental value, Kat agrees to head below the city to retrieve it.

Unable to find the letter down below, Kat decides to head further down the World Pillar, hoping to find it somewhere. Her journey takes her inside the Pillar itself, where she discovers that the time and space functions differently inside the pillar and that it severely limits her powers. She continues to make her way down regardless, using what little power she has. Going in and out of the pillar, she eventually reaches a point where she can use her powers, even inside.

Soon, Raven catches up and gives Kat one last chance to turn back, or else she will kill her. Kat refuses to quit, leading into a vicious fight between the two shifters. They eventually make it to the bottom and outside again, but before they can continue to fight, they hear a roar coming from the dark ocean below them. As Raven looks on in terror (knowing what the roar came from), something lashes from the abyss and destroys the platform Kat is standing on, knocking her unconscious and sending her falling into the abyss.

Make your way towards each navigation marker presented to you as you make your way down the giant pillar. When you eventually have to go inside the pillar, Kat's gravity powers are disabled; the only thing you can really do is fall down until you reach the bottom of that section. When you're outside, there will be a bunch of Nevi, but eliminating them is not required at any point, so they can be ignored entirely.

You will eventually become engaged in a "battle" with Raven. The only difference is that you need to survive the encounter until you reach the bottom of the shaft. She has two attacks you need to be mindful of: her Blue Jays, which is Raven's projectile attack, the second is a gravity field that will teleport you back up the shaft to the last branch you passed. Speaking of which, you'll come across some branches jutting out from the walls, with one or two Vitality Gems on them; use them to regain any health you lost during the fall in this section. You can use Gravity Typhoon to stun Raven momentarily to make your experience a little easier.

The Blue Jays however can be somewhat tricky to dodge, as it is hard to judge how close they are to you since the depth perception isn't that great. When Raven fires them off, stop shifting, tilt the camera slightly so the orbs in still in view, and dodge them as you would normally. You could feverishly spam the dodge maneuver, but this isn't recommended as it could bring about bad habits. 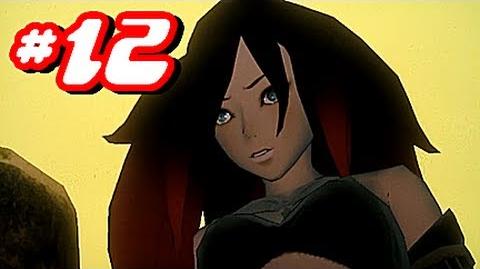 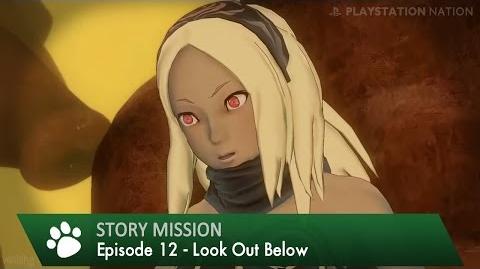 Gravity Rush Remastered - Walkthrough - Episode 12 - Look Out Below
Add a photo to this gallery
Retrieved from "https://gravityrush.fandom.com/wiki/Look_Out_Below?oldid=16157"
Community content is available under CC-BY-SA unless otherwise noted.