Edit
watch 02:03
"Gravity Rush" Lore: Lisa
Do you like this video?
Play Sound

Leader of the Banga Fleet

Lisa is a major support character in Gravity Rush 2, the strong and short-tempered leader of the Banga Settlement, and a descendant of the Lhao tribe. Ever the realist, she inspires both fear and respect in the villagers but always prioritizes the safety of the settlement. Being of Lhao heritage, she often conducts rituals in her tribe's honour.

Lisa had a daughter of her own at one point but she lost her to a Gravity Storm a long time ago (as Gawan later states), which is most likely the reason why Lisa is as hard on Cecie as she is—to ensure she doesn't lose another loved one.

Lisa is first seen rescuing Kat and Syd from the mines after a Gravity Storm hits. She is furious that the pair had damaged two grav-suits, having ignored orders to retreat. She is initially very dismissive towards Kat, refusing to believe her stories about shifting gravity, until she sees Kat use aforementioned powers to defeat a giant Nevi first hand. Lisa reluctantly allows Kat to represent Banga in a target game that Vogo had arranged in an effort to get more favorable shipping terms for the village. After the target game is discovered to have been rigged, Lisa oversees the B'oarack challenge to negate all possibilities of cheating.

Later on, when Kat develops a concussion from her first confrontation with Night Gale at Lei Elgona, Lisa scolds her for trying to be heroic, stating that her actions will only make things worse. She allows Raven to stay in Banga after the latter is freed from mind control and helped Kat to stave off the Garrison forces, but she is displeased that Kat had once again caused problems for the settlement by damaging one of the windmills during her scuffle with Raven. After this however, Lisa is taken prisoner along with Syd, Cecie, and some other villagers by the Garrison and the Council; though, she is eventually released. Angered that the Council didn't hold up their end of a bargain to release the remaining prisoners after Kat and Raven did their bidding, Lisa decides that she has had enough and stages a revolt to overthrow the Council with help from Kat and Raven. She later calls for a town meeting at the theater in Lei Havina, when the Lost City suddenly appears through a rift and attacks the city. At first, Lisa refuses to help evacuate the people from the area, until Kat reminds her that social classes don't exist in a time of crisis, to which Lisa relents.

Lisa isn't seen again until How to Say Goodbye. With help from Alias, she somehow brings Jirga Para Lhao through a rift into Hekseville's dimension and helps put a stop to Dr. Brahman's plans to freeze time. As she calls out to Cecie, her voice resonates with the latter, and she eventually comes back to her senses. During the credits, Lisa is seen carrying Cecie away in her arms, and then passing on a message to Kat from Alias.

Lisa comes in again to assist Kat in defeating the Destructive Force in A Song Without Voice. Piloting the Bismalia, Lisa aids Kat in taking out some of the Destructive Force's weak spots, bringing its health down faster. The effort proves futile however, as the Bismalia is shot down, presumably killing Lisa. A year later, Lisa is shown to have survived the encounter and now acts as a leader for both Jirga Para Lhao and Hekseville, though she doesn't consider running for mayor as she "doesn't care much for titles." She has expressed a great deal of confidence and gratitude in leaving Cecie in charge in Banga whilst she's away. Like Raven however, she responds with total silence as soon as Kat's name is mentioned.

Lisa is stern, pragmatic, and frequently short-tempered. She tolerates no laziness or excuses from her workers and demands that everyone contribute their share to the settlement's well-being. She rarely smiles, commanding an authoritative and fearsome presence in front of others. She'll even go as far as to starve her workers if they don't pull their weight.

She maintains a grounded, realistic view of the world, to the point where she and Kat frequently clash with one another on the correct course of action. After Kat descends to Lei Elgona, she expresses disbelief and anger that Lisa would stand by and allow the poor of Jirga Para Lhao to be exploited. Bristling, Lisa responds that "We can't feed our families on ideals" and that "if we argue or fight back, things just get made worse." Her heritage as a Lhao causes her to harbor a deep-seated hatred for the reigning Council, but her practical, even cynical attitude has resigned her to working with them and with unsavory merchants such as Vogo.

After the events leading up to No Messiah, No Message, Lisa undergoes an abrupt change. Chopping her hair short and doffing her duster-like outerwear, she admits that Kat was right and that "if we don't fight for what's ours, we don't deserve it." She declares her intent to revolt against the Council, and with Kat's help she succeeds in overthrowing them, reclaiming the Cargo of the Lhao tribe and becoming the city's leader. Even then, though, she urges caution; when the Lost City descends upon Lei Havina, Kat demands she send in the fleet to assist, but Lisa refuses, saying they must consider the greater good of the city.

Lisa is implied to be a heavy drinker at the outset of the game, as she is depicted in cutscenes carrying a flask or taking swigs from a bottle. According to one of the residents of Banga, she often drowns her sorrows in alcohol, and her drink of choice is described as "rot-gut." As the story progresses, however, she is seen drinking less and less frequently.

Cecie is Lisa's adopted daughter, having taken the young girl in after arriving in Banga through a gravity storm. Most of the time, Cecie is on the sharp end of Lisa's strict teachings, but Gawan implies that this is for Cecie's safety. Though she doesn't show it, Lisa does care very much about Cecie, and is thankful for the work she's done, as shown in the side mission "If I Had Just One Wish". Lisa's love for Cecie proves to be pivotal in awakening Cecie from her Durga form.

The extent of Lisa's relationship with Misai isn't clear, though at the very least, it seems to be a professional relationship. Both Lisa and Misai hold pretty similar values regarding work ethics; as neither of them have any patience for laziness or excuses. Both are initially dismissive of Kat as well.

Gawan has been with Banga ever since Lisa was a small child. It is implied through a conversation that Gawan was something of a parental figure towards Lisa when she was growing up. Gawan even mistakes Cecie for a young Lisa in the epilogue.

Lisa harbours disdain towards Vogo for the amount of trouble he causes Banga in the beginning. Despite her hatred towards Vogo though, she still finds some value in working with him, even if he is somewhat shady.

When Kat first ends up in Banga, Lisa immediately put both her and Syd to work in the mines. She sees Kat as nothing but trouble since arriving, as she bore the brunt of Lisa's wrath sometimes. Upon witnessing Kat destroy a Nevi/Scarab, Lisa is quickly apologetic towards Kat, and allows her to have the spare room. Despite her initial feelings towards her, Lisa gradually warms up to Kat over the course of the game, going as far to assist Kat in two major boss fights, though she still questioned Kat's heroic tendencies at times, and their ideals still clashed now and then. Even so, Lisa still looks out for Kat and is willing to help her in a time of need, as demonstrated in Kat's fights with Kali and the Destructive Force. During the epilogue, it seems that Lisa misses Kat (still not as much as Raven), as implied with a silent response at the mention of Kat's name.

Much like Kat, Lisa saw Syd as nothing but trouble upon arriving in Banga, especially evident after she is introduced. While not to the same extent as Kat, she warms up to Syd after discovering who Kat really is after she saved the settlement from a giant Nevi. She seems oblivious to Syd's antics, and doesn't call him out for disobeying an order she gives. Throughout their time in Jirga Para Lhao, she and Syd are often seen together in the over-world, usually discussing maintenance work on the airships.

Lisa and Raven don't interact with each other very much of the course of the game, only mentioning Raven by name occasionally. After Kat rescues Raven from brainwashing, Lisa welcomes her into Banga since Syd was able to vouch for her, and that her past doesn't matter. She does allow Raven to join Kat in rescuing Syd, Cecie, and other prisoners from The Council's prison base. However, she becomes concerned about Banga's budget when Raven settles in, and eats the meal she had prepared for the whole settlement.

Lisa with Kat and Syd. 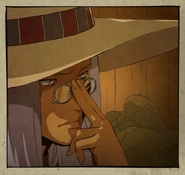 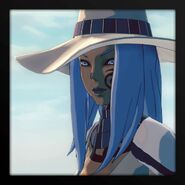