Agreeing to Vogo's plan to infiltrate the Garrison's military base, Kat is mistaken for one of the performing troupe's singers, and is forced to take the stage. As she finishes her number, something goes wrong.

When Kat arrives at Sun Mansion, Vogo is about to discuss his plans when Raven barges in. The plan is to infiltrate Fort Bismalia to do some reconnaissance. On the way up, Kat decides to take a picture of the giant fort itself. Once she is there, Vogo and Raven draw the guards' attention so that Kat can sneak in. She needs photos of the lead commander's private boat and the main deck from the command bridge.

Once she has the photos, Kat attempts to leave the base by using the side gate but is cornered by the performing troupe, mistaking her for their singer. She is then forced into a red dress and to take the stage in front of an entire army to perform. Once she gets over her initial stage fright, she plays along and starts to sing "A Red Apple Fell From the Sky", until she finds herself surrounded by soldiers with guns pointing at her.

After she, and eventually Raven, fight through the hordes of soldiers, they discover that Lisa, Cecie, and Syd have been arrested. It turns out that Vogo had sold Kat out to cover his tracks so that the Council could have Banga's mining tech. Held prisoner, Syd is not too fond of their living quarters, and Lisa is mocked by some of the Council members for being one of the few remaining descendants of the Lhao Tribe, whom the Council thought were extinct. Furious that Vogo lied to her, Kat confronts him back at Sun Mansion, but he tells her and Raven that the Council want to strike a deal that would release the prisoners; though, Lisa was already released to help them with the mining operation. Raven arranges for Kat to meet with her at the Council's chamber later on.

Start by following the blue gravity gems up to Fort Bismalia, until you are prompted to take a photo of the Bismalia about half way up. When you get there, hide behind a container from the guards. Once you're inside the fort, use the building to your left to head deeper into the fort undetected, taking out any guards in your way.

Cross over to the control tower and head up two flights on stairs to the top tier, where you will find the lead commander's private air boat, and take a photo of it from the front. Next, head to the roof of the bridge overlooking the main deck and snap a picture. Head to the gate to your right, and wait a little before trying to open the gate.

After a series of comic panels, press the corresponding buttons to form the line: "A Red", "Apple", "Fell", "From the Sky". After a brief stage performance from Kat, you'll have to fight off Garrison forces; Piercing Throw is highly recommended to defeat them quickly. Eventually, Raven will fly in to assist until another series of comic panels starts. 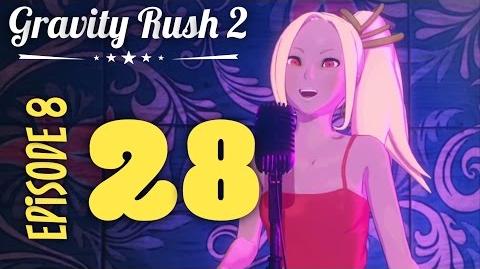 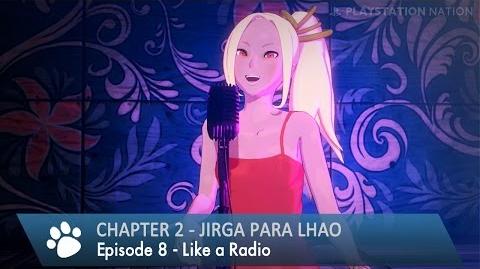 Gravity Rush 2 - Chapter 2 - Episode 8 - Like a Radio
Add a photo to this gallery
Retrieved from "https://gravityrush.fandom.com/wiki/Like_a_Radio?oldid=16160"
Community content is available under CC-BY-SA unless otherwise noted.