Cricles in the Water
Separate Tables

The Spoils of War
Shifter's Choice
The Wages of Fear

Lei Elgona also called the Houseboat Fleet, is a location in Gravity Rush 2. The lowest level of Jirga Para Lhao, it is a ramshackle collection of run-down houseboats, shanties, and wooden structures that sits at the bottom of the city. It is wrapped in a perpetual haze of fog, and is home to the city's lower classes.

Kat first ventures to Lei Elgona during the mission "Circles in the Water", where she follows the Angry Centipede, a gang that was stealing ore, to their hideout to confront them . However, after confronting the gang, she'll realize that their true motive is to steal ore to feed the starving people of Lei Elgona. Because of this, she helps them drive off a troop of Garrison forces, who happened to be raiding their area, and befriends them, secretly delivering a supply of ore to the townsfolk afterwards (to which Lisa and Vogo were not happy about).

In the mission "Separate Tables", Kat is hired by a wealthy woman in Lei Havina to deliver fuel for a party. However, if the player so chooses, she can deliver the fuel to Lei Elgona instead, where the citizens use it to warm their food and water.

Regardless of her choice, Kat returns to Lei Havina to learn that the Council has plans to build a new amusement park facility in Lei Elgona, sending the Garrison to raze the buildings and clear out the current residents. Outraged, Kat descends to the now-burning Houseboat Fleet and confronts the military. She manages to repel them, but not before being defeated by their secret weapon: a mind-controlled Raven, whom they call "Night Gale."

At the end of the "And the Soldier's Wife?" mission, the Council announces that, along with the citizens of Lei Colmosna and Banga, the people of Lei Elgona are to be sent to work in the mines. However, as their control over the city is broken in the subsequent episode, this does not come to pass. 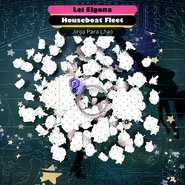 Kat standing outside the entrance to the Angry Centipede's hideout 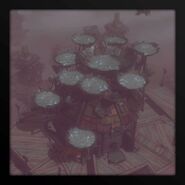 The fleet's water tank, which filters rainwater for the citizens to use 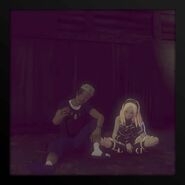 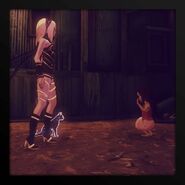 Gravity Rush 2 OST - Lei Elgona
Add a photo to this gallery
Retrieved from "https://gravityrush.fandom.com/wiki/Lei_Elgona?oldid=15753"
Community content is available under CC-BY-SA unless otherwise noted.