Kat is the main protagonist of Gravity Rush.

Having started out as a lost girl with no memory, Kat quickly embraces a superhero role within the city of Hekseville as a shifter. Her adventures eventually take her to the ends of the world, where she is allowed glimpses of her clouded past.

Template:Spoiler The details of Kat's origins are unknown as she is suffering from amnesia and has yet to regain her full memory. However, it is evident that she was an inhabitant of a city at the top of the world pillar prior to falling to Hekseville. It is also probable that Kat was a figure of great power, possibly a queen as implied by Cyanea's dream in Boutoume. As well, in the maid dlc we can see a part of her story which tells what happened to her, and that her real name is "Gruyere"

Kat is a down-to-earth, intelligent, selfless girl who is willing to make personal sacrifices in order to save people in need. Despite having no memories prior to her fall to Hekseville, she is mostly very upbeat and welcomes the attention and praise of being a superhero. At times, she expresses the desire to have a boyfriend, but she demonstrates great emotional strength when confronting danger. Kat is outspoken and sensitive to the feelings and attitudes of others as can be seen in her relationship with Raven and Yunica.

As a shifter, Kat has several gravity powers available at her disposal. Her foremost ability is to shift gravity in any speed or direction to float and fall accordingly. Other basic abilities include flying, lifting and throwing objects, and being able to walk on any vertical surface. She performs physical attacks which she uses in conjunction with her gravity manipulation including a Gravity Kick and Gravity Slide.

Kat possesses a superhuman degree of durability. She has repeatedly been shown to survive falling from heights that would injure or kill an ordinary person, along with resisting Nevi attacks to an extent. Kat's also shown to be quite flexible and acrobatic; shown in her fighting style involving only kicks and performing evasive maneuvers.

Finally, she has several special powers at her disposal which she can also upgrade including Spiraling Claw, Gravity Typhoon, and Micro Black Hole.

Despite her immense powers, Kat needs to remain in contact with Dusty in order to use them. Without her animal companion, she cannot manipulate gravity.

There is a time limit for Kat's ability to fly. If Dusty becomes sick for any reason (as in Episode 10), the time limit becomes even shorter.

Being new to the superhero role, Kat is also somewhat inexperienced and can be easily deceived, as evidenced when Alias (disguised as Syd) tricked her into stealing the Sacred Gem protecting Auldnoir. 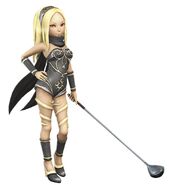 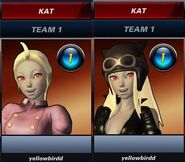 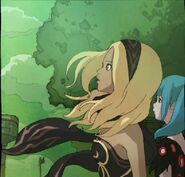 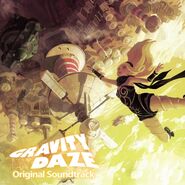 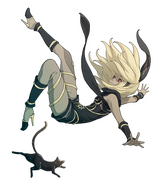 Kat with Raven in Jirga Para Lhao in Gravity Rush 2

Kat's outfit while working in the mining settlement of Banga.

Kat with Kali Angel in Jirga Para Lhao
Add a photo to this gallery
Retrieved from "https://gravityrush.fandom.com/wiki/Kat?oldid=8340"
Community content is available under CC-BY-SA unless otherwise noted.