As Raven returns to Hekseville, Bit begins the final stages of his plan by removing the Elements of Light and Dark from within her. As he does so however, Lumino and Tenebria trick the Keepers and steal their power to manifest into their physical forms again. Lumino wants nothing more than to be free, while Tenebria wants to be left alone by humans. Bit tells Raven that she doesn't have the power she needs to seal the Light and Dark away for good until she reclaims the last of her memories. As the last of her memories are reclaimed, Raven powers up and merges with Xii, granting her use of Phoenix Mode. The Elements express disappointment with Bit for siding with humans, but he reminds them that he didn't interfere, rather he only guided. With this new found power, Raven is able to destroy the physical forms of the Light and Darkness, and return them to the Ark. But their work has not gone unnoticed...

You will need to find the last 8 of Raven's memories before you can fight Lumino and Tenebria. They appear as glowing blue orbs, as they did back in Episode 2. Lumino and Tenebria will harass you constantly as you try to find these memories. If you take too long, Bit will tell you to fight back; but you can't defeat them yet. You can however, get rid of them temporarily in order to guide you to the next memory. After being powered up with Phoenix Mode, Lumino and Tenebria can be taken down. Use Raven's increased damage output to deal as much damage to them as you can. Raven's regular attacks will now work on the Elements as they did in Episode 4, but they will try to strengthen their partner, so attack the one giving the extra power. When either Lumino or Tenebria's health reaches close to zero, move in to finish them off.

You will unlock the "Unrivalled" trophy if you can recover a memory without interference from Lumino and Tenebria. 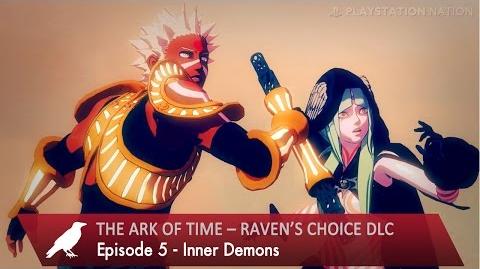 The Ark of Time – Raven’s Choice DLC - Episode 5 - Inner Demons
Add a photo to this gallery
Retrieved from "https://gravityrush.fandom.com/wiki/Inner_Demons?oldid=14992"
Community content is available under CC-BY-SA unless otherwise noted.