How to Say Goodbye

In the center of the growing crystalline structure are the two Angels, Kali and Durga. Yunica and Permet move to stop them, while Kat and Raven are caught in the middle, and all hope of stopping Dr. Brahman's mad plan seemed to be gone.

How to Say Goodbye is the twentieth episode of Gravity Rush 2. It is the eighth and final episode of the Hekseville chapter.

As Kat and Raven regain consciousness, they discover that Dr. Brahman's plans are already in motion. The angels are shrouded by a crystalline shield (powered by the bubs used to harvest gravitational energy), while the rest of the world starts to enter a frozen time state. With help from Yunica and Permet, Kat and Raven set out to destroy the force-field by taking out the bubs providing the energy for it. Soon, the force field shatters to Kali's shock, but Durga becomes conflicted when Cecie's conscience starts to resurface. Before Kat can say anything to her, Yunica and Permet set their sights on her, still seeing the angel as a threat.

Kat tries to protect her friend by fighting the rebels while still be harassed by Kali. As Kat and Yunica bicker, the energy field is almost restored until a giant cannon blast blows it to bits completely; the blast came from the Bismalia, piloted by Lisa. Somehow, Jirga Para Lhao had crossed dimensions to help put a stop to Brahman's plans. Lisa reaches out to Cecie in order to bring her back to her senses, causing her Durga persona to slowly fall apart. Adamant that Cecie/Durga is her sister, Kali tries to reassure her that she is Durga and that there is no Cecie. Kat and co. take the fight to Kali in an effort to help Cecie gain control of who she is. As Kat and Raven attempt to finish Kali off though, Durga swoops in and take the hit herself, falling to the ground below. This causes Kali to kick her healing powers into overdrive to save her sister, which also transform her into a hideous mass of faces in limbs (swatting away Brahman's airboat in the process).

Permet detects odd heat signatures coming off of the mutated Kali and that the eyes are its weak points, so everyone starts to attack the eyes. They soon discover an energy core similar to that of a Nevi's. It is concealed again but quickly exposed when fired upon by Yunica and Permet, giving Kat and Raven the opportunity to destroy it, which ultimately results in the demise of Kali Angel.

During the credits, Dr. Brahman realizes that freezing time was not the way to see his daughter as he lays dying from being impaled by debris from his crashed airboat. Cecie is also seen being carried away Lisa, all while elucidating how she could not be what Kali wanted, and that the realization ended up destroying her. As the news gets around about Kat's triumphant return as the town's hero, she asks Lisa if she has heard anything about Syd. While she had not heard anything, she in turn asks Kat if she knew who Alias was; it turns out he was responsible for guiding Lisa to Hekseville with the simple instruction to help Kat save the city. Though Kat knows of Alias, she cannot explain to Lisa why she knows him. As the credits close, there is final shot of the clock tower and a golden girl in the foreground. The story is not over yet...

For the 4 additional conversations that unlock the next episode, see that episode's page here.

This episode is broken into four separate fights: the first is to destroy the crystalline shield, next you're fighting Yunica and Permet, then Kali, and finally her mutated form.

You will be tasked with taking out the crystalline shield housing the angels. In order to do so, you will first need to destroy the bubs that supply its energy; your allies will play a big part in destroying them faster, so focus on whichever bub is closest, but don't touch the shield itself as it will cause damage. When the bubs are gone, switch to Jupiter style and kick the shield hard with a fully charged Surge Kick. With Raven accompanying you, the damage is increased by 50% to hopefully make the fight shorter. Bubs will periodically replace the defeated ones, but Yunica will let you know when more are inbound. Keep this up until the shield's health bar drops to zero.

For this phase, you'll have a rematch with Yunica and Permet, but this time you'll have to prevent them from attacking Cecie/Durga. If Cecie/Durga dies, it's Game Over. Other than that, this is more or less the same battle as in Episode 16, but you won't need to defeat both Yunica and Permet to succeed; defeating one or the other is enough. As before, be extremely careful of missile barrages and Permet's laser attack, and use Lunar style to your advantage. Oh, and you have to fight them both while Kali is constantly harassing you, so be mindful of that.

Next, you're fighting Kali...again. Armed with crystalline blades this time around, she is very dangerous to fight on the ground, but Jupiter style's guard will protect you from her swings and open her up for you to counter attack. When in the air, Durga will trap you inside a small cage; just perform a couple of Heel Stomps to break free. Kali will also grab and throw you to the ground, which can do serious damage if you land, so be cautious. If you have the SP for it, then charged Vortex Throws will aid you in this fight.

Finally, you must defeat a horrifically mutated Kali. In this form, she never moves, but is still a threatening opponent. Use the Double Surge Kick to attack its weak points: the eyes. Kali's screams will blow you away from time and time, which you can prevent/minimize by staying in Jupiter mode. The clock tower has plenty of Vitality Gems scattered around it, so go and grab a couple if you need the health. When all of the eyes have burst, pull back a bit, centre the camera, and press the touch pad to finish Kali off for good, and thus finish the Hekseville chapter. 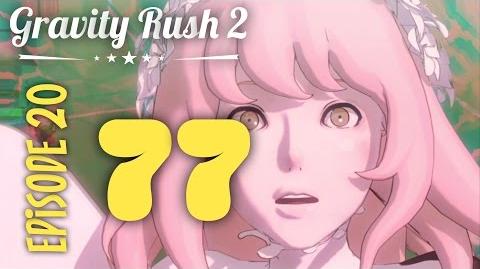 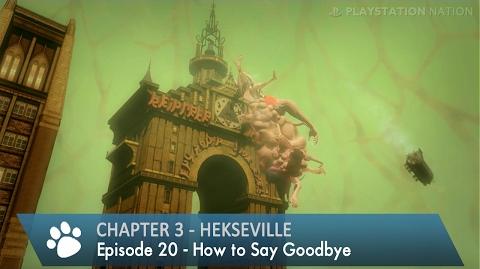 Gravity Rush 2 - Chapter 3 - Episode 20 - How to Say Goodbye
Add a photo to this gallery
Retrieved from "https://gravityrush.fandom.com/wiki/How_to_Say_Goodbye?oldid=16265"
Community content is available under CC-BY-SA unless otherwise noted.