Shadows over the City

I just wanted to catch a break. More than anything, I needed a place to just be by myself and think. Now if that place happened to come with a shower and a means of doing laundry, all the better. I definitely could have used a little cleaning up.

Home Sweet Home is the third episode in Gravity Rush. Kat is given her name and she finds a home to live in.

...Having found somewhere to live, the gravity shifter decides it is time to decorate it with some furniture. She then hears a scream from up above and goes to investigate. An old lady is being attacked by some Nevi. As thanks for disposing of the strange creatures, the old lady gives the shifter the chair she was about to throw out, and the shifter bolts before the old lady starts to ramble. She takes the chair by using her Stasis Field power to lift it into the air, so she can bring it back to her home.

She then heads up to street level to talk to a man who is ranting about how pointless it is studying at his desk all the time. With the man having decided to see and experience the world first-hand instead, the shifter asks if she can have the desk herself, to which the man agrees and tells her it is in an alleyway. She grabs the desk using Stasis Field and uses the manhole, which she fell down earlier, to bring it back to her home.

Finally, the shifter returns to the street in search of a bed to sleep in. She eventually runs into Syd again, the police officer she had saved previously. It is here in which Syd gives the shifter a name, especially since she could not remember her original name; since she has a cat following her around, he settles on naming her Kat. Syd rambles about how his boss asked him to throw an old bed out for him, but he allows Kat to have it since she was looking for one anyway. When she finds it at the factory, Nevi suddenly appear and attack her. She decides to get rid of them before taking the bed with her, seeing as how they are a threat to innocent civilians. Once they are gone, she uses another manhole as a shortcut back to her home, where she is now satisfied with what she has.

Kat is later seen decorating her home further (even being stopped by a police officer when she tries to take one of the street lamps), taking a much needed shower, and generally enjoying her new home (though not without her bed falling apart).

Follow the marker to the source of the scream, and there will be some Nevi there harassing an old woman. There are only two of them, and they should not be hard to defeat. You will learn how to use Stasis Field in this episode, which will be a key mechanic later on.

Next, head towards the information, or rumor spot, in the town center. Look at your map and find the dialogue location. Mark this location and then go there and talk to the man who will offer Kat his old desk. The desk is found in a nearby alley; use the Stasis Field to pick it up and bring it back to Kat's home. You can take less time bringing it back if you go to the manhole location by the fountain.

After this, another rumor spot is available. Mark this one on your map, go to it and talk to Syd, who tells you about an old bed that he threw away for his boss. When you find the bed, some Nevi will appear. Defeat all of them, and do not forget to use your gravity kick to eliminate the larger ones here. After beating the Nevi, you can then use Stasis Field to pick up the bed and bring it back to your house to complete the episode. 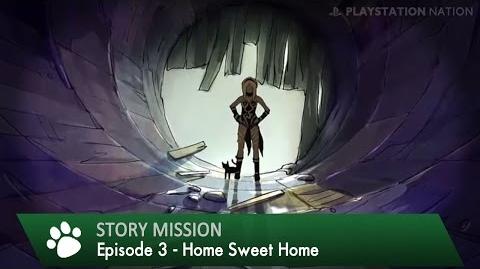