Shadows over the City

Gravity Rush
Everything was a blur; I couldn't remember a thing. Why did that black cat start following me? Before I had a chance to think, I was asked to save someone's kid. I think it was the cat, but gravity flipped upside down. Even though I saved the kid, I ended up getting nothing but grief for it. I kicked open a door and saw a huge cliff going down and down forever. Nothing about that crazy city made any sense...

From Oblivion is the very first episode of Gravity Rush.

An apple falls from a tree and rolls down the street in a small city below the kingdom in the background. It eventually comes to rest in a small slum once it taps a young girl (whose name is not given at this time) on the head, waking her in the process. With no idea who or where she is, and with no one around other than a black cat, she makes her way through the courtyard. Once she makes it out, she is startled by a mysterious man.

The man begs for her help to save his son from a gravity storm. Without thinking about how to do so, she follows the man through the tunnel to his home. Along the way, he is informed by another resident that his house is about to be taken away by the storm, which is where his son (named Eugie) is. The man, revealed to be named Aujean, begs the girl to use her strange powers to help; she does not have a clue what he means by this.

Before she can say or do anything else, the cat that has been following her starts to glow, lifting her into the air and changing her gravitational direction. She uses this power to reach Aujean's house but not without seeing a police officer get dragged into the storm by a giant hand. As Eugie is about to be consumed, the girl leaps into the air to catch as the hand tries to smash them both. The storm subsides when the cat destroys the hand. The house falls gently down to solid ground, but it starts to slip as Aujean and Eugie are reunited. She tries to save the house but is unable to do so, leading to a misunderstanding that she pushed it off when Aujean looks up at her.

She runs off, visibly upset that she was scolded for trying to help, when she sees a door that leads to nothing but a bottomless void below the city. Some time later, she tries to befriend her new feline companion, affectionately naming the cat "Dusty". Dusty chases after a strange crow with a similar aesthetic to Dusty; this causes the girl to chase after Dusty and use her shifting powers to catch the crow. She meets another strange girl with similar powers to her own, who is the owner of the crow. Before the girl can ask her anything, the mysterious "crow girl" scoffs at her and leaves, when she hears a commotion below her. She sees another police officer about to be beaten up by some street thugs. She effortlessly saves him, but she is still keen for answers...

After the cutscene, just keep following Aujean who is at the time known as the Mysterious Man. When you get to the bridge, another cutscene will start. Gravity will shift and take you to a wall. From here, you are given a tutorial on how the gravity shifting mechanics functions. Use the R (or R1) button and follow the markers until you reach Aujean's house.

After several cutscenes you will be back playing Kat again, but Dusty will run away. Just follow Dusty and the navigation marker on him. If you lose Dusty or get too far behind, it will restart. After Dusty stops, gravity shift through the air and keep up with the crow. After following the crow, another cutscene will start. Just follow the checkpoints again until you get to the crow girl. After meeting her, another cutscene will start to which will begin Episode 2. 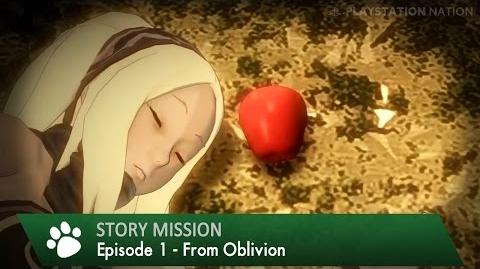 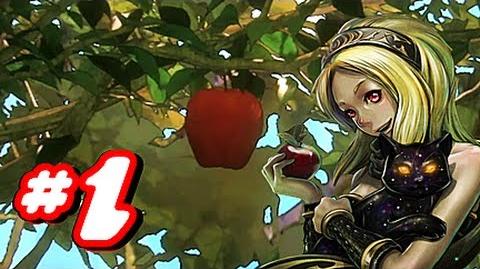 Gravity Rush - Part 1 Episode 1 - From Oblivion
Add a photo to this gallery
Retrieved from "https://gravityrush.fandom.com/wiki/From_Oblivion?oldid=15289"
Community content is available under CC-BY-SA unless otherwise noted.