Dusty is a cat shaped Guardian featured in Gravity Rush, Gravity Rush 2, and Another Story - Raven's Choice. He belongs to Kat and grants her the ability to shift gravity.

When Queen Alua fell from Eto, her guardian, in the form of a cat, appeared and saved her from the fall. He is all she sees when she eventually wakes up.

A black cat watches Kat awaken in the slum area of a yet unnamed town. She tells it to go away, but instead follows her around until they witness a boy being dragged into a gravity storm. After helping Kat rescue the boy (named Eugie) by giving her gravity shifting powers, she decides to give him the name Dusty. He soon ran off after spotting a crow. Later on when he runs off again, he leads Kat into a strange plane devoid of life and colour; it becomes clear at this point that Dusty is the source of Kat's powers, thus she cannot afford to lose him.

As Kat leaves to find the missing part of Endestria, the city's factory district, Dusty nibbles on what appear to be cookies, but they were actually "Nevidelic", a pesticide of sorts that kills any Nevi that consumes it. The poisonous treats severely weaken Dusty, and thus Kat's ability to shift gravity as she explores the Mirage Plane for the lost piece of the town. By the time she recovers it, Dusty vomits up the Nevi killer and his powers return to normal. Much later in a dream Kat has, Dusty is split into 20 copies which Kat must retrieve to fight the panther that Alias had created. When she is jolted from her sleep, Dusty crawls out from under her bed cover.

Dusty is later captured by the military to prevent Kat from fleeing or resisting when they soon try to capture her. He is saved by Cyanea, and soon transforms Kat into a panther to deliver the final coup de grace to the Sea Anemone and save Hekseville from impending doom.

Another Story: The Ark of Time - Raven's Choice[]

When Raven returns from the Labyrinth and finds the whole town in a frozen time state, Dusty leads her to Kat in front of one of the Loop Stations. His most important role in the story is when he merges with Xii to help Raven defeat the giant Collector.

Dusty is nowhere to be seen in the opening episodes of Gravity Rush 2, leaving Kat to work the mines in pressurised suit. When a gravity storm hits Banga, Dusty finally reappears before Kat after she chases after Cecie, who had secretly been looking after him when he, along with Kat and Syd, first arrived through a gravity storm. From there, he accompanies Kat throughout the whole story.

When Kat makes it to Eto, he is caged up with Xii, and kept in an icy chamber where Raven imprisoned. During the fight against the Darkness, Dusty's remaining power is drained, causing him to disappear along with Kat's remaining powers. Kat soon merges with both Dusty and Xii to form a giant Gryphon that summons countless Dusty and Xii clones to destroy the giant beast. The guardians join Kat as she heads to the bottom of the world to seal the Darkness away, with Dusty staying behind, and Xii returning to Hekseville. A year later, as Raven is out patrolling the city, she hears a familiar cry. Believing it to be Dusty, she frantically searches for him as she begins to question her grip on reality. His return is ambiguously confirmed given Raven's reaction to one final cry.

Dusty appears to resemble a starry night sky that has taken a physical shape. Of course, he takes the shape of a cat. When he radiates gravity energy, two bright red "stars" glow (see above image) brighter than all others, giving these the appearance of a pair of eyes.

As a guardian, Dusty grants the power to shift gravity to his owner. His power allows his owner to float and "fall" through the sky, use special attacks, and throw objects with a Stasis Field. When Kat powers up enough, Dusty gains the ability to transform into a panther for a limited time, letting Kat bound quickly through the air and do massive amounts of damage.

It's shown that Dusty's true form is actually the Gryphon Guardian, which was split in half into Dusty and Xii. They have the ability to merge into a new, far more powerful form that can shoot out countless clones of the two smaller Guardians. Its full power is used by Kat to defeat the Destructive Force.

Dusty appears in every episode in the game.

Another Story: The Ark of Time - Raven's Choice[]

Dusty appears in every story episode, except for the following:

Dusty appears in most side missions. He sits out of the "A Legend is Born", and "Find the Idol" series of side missions, where Kat is unable to use her powers.

Dusty has made appearances in games outside of the Gravity Rush series. 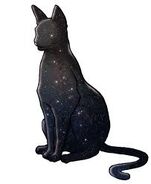 Kat holding Dusty in an early cutscene from Gravity Rush 2 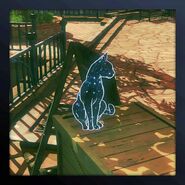 Dusty alongside with Kat and others.

Español
Community content is available under CC-BY-SA unless otherwise noted.