Formerly known just as Durga, she was kidnapped as a child by Dr. Brahman and subjected to an experiment with the end goal of making her into a super powered "angel". She was then swept into a dimensional rift, possibly on purpose to find the "star genome", though it is unclear what this is or whether she is able to obtain it.

When she comes out of the rift, she loses her memory and reverts back to her original self but under the new name Cecie.

Cecie is brought by Raven through the rift back to Hekseville after being rescued from the core of the Lost City. Cecie turns back into Durga Angel when she was touched by Kali and she attempts to kill Kat. She nearly succeeds, but The Other teaches Kat how to awaken even more powers from Dusty.

Kali and Durga attempt to initiate Dr. Brahman's plan but are stopped by Kat and Raven. This almost fails yet again, but Lisa appears and breaks the angels' shield long enough for Yunica to blow it up. Kat and Raven use their finisher against Kali, but Durga takes the hit instead and plummets to her death.

Kali turns her regeneration abilities on overdrive to save Durga and in the process goes out of control and become a monster. Ultimately Durga reverts back to Cecie upon Kali's defeat.

At the end of the game it's revealed that Durga has completely merged with the mind of Cecie and now has Cecie's memories and personality, being able to turn back and forth at will. She totally crystallizes Destructive Force, but this proves to do nothing against it and she is swatted away for the rest of the battle.

She acts like a child and treats everything like a game. She is, however, fiercely protective of Kali and is willing to sacrifice her very life for her.

Durga has a similar power as her sister—to manipulate and generate crystals. However, she appears more powerful in this regard.

Durga Angel can summon and utilize crystal shards in various ways; she can create a group of shards that act as an offensive shield and also launch them individually, consecutively, or all at once. She can also form spherical crystal structures using arched crystal pillars to trap her opponents in and from nearly any distance, and she can create strong defensive barriers against ranged or physical attacks—which her single directional shield was strong enough to easily repel Kat's and Raven's combined finisher attack—to cover all directions, though the best type shown was only the barrier that covered her back, sides, and abdomen.

Her new wings also gives her access to flight, which supports her crystal formation powers and flexibility with them even more. While sustaining flight, she can still use a variety of attacks simultaneously, such as producing her surrounding, defensive barrier in conjunction with her offensive surrounding shards technique, or using the crystal pillars enclosing trap in conjunction with the projectile shards technique.

The relationship between the angels is not very fleshed out, but Durga is quite protective of Kali, using her crystal powers to shield Kali from a combined finisher from both Kat and Raven. She will even risk her own life to protect her sister from harm the second time Kat and Raven try to finish Kali off.

After the energy shield is destroyed, Durga suddenly recognizes Kat, and questions her allegiance. This is likely Cecie regaining control over her angel persona. Though she helps Kali to defeat Kat, it is likely that she does so purely on sibling instinct. 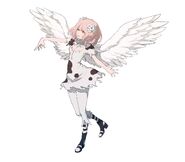 Durga as a child.

Durga alongside with Kali and others.
Add a photo to this gallery
Retrieved from "https://gravityrush.fandom.com/wiki/Durga_Angel?oldid=14363"
Community content is available under CC-BY-SA unless otherwise noted.