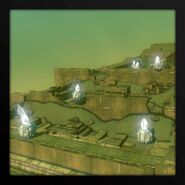 Nevi in Mining Site No. 13 with alternate colorations, signifying greater health and damage output. These Nevi should not be confused with the benevolent white Nevi of Eto.