Some costumes are unlockable through other means outside of missions.

Aside from Kat's default costume, the player will obtain the other four costumes upon completing their respective missions. Three of which are only available through DLC.

In addition to a larger selection of costumes to wear, these are all obtainable (minus the Grav-Suit and Queen Alua costumes) either through certain story missions, side missions, or collecting Dusty Tokens. Kat can change her outfit when the player enters camera mode and presses the O button. 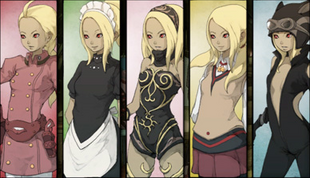 Retrieved from "https://gravityrush.fandom.com/wiki/Costumes?oldid=16830"
Community content is available under CC-BY-SA unless otherwise noted.