Among Cecie's most notable traits are that she is very timid, quiet, and reserved. Yet, despite being scolded by Lisa on several occasions, she remains loyal to her adoptive mother and always tries her hardest to keep her happy. She appears to be afraid of letting Lisa, and to an extent Kat, down, as demonstrated by an apologetic demeanour when she does something wrong or makes an error of judgement.

Her interactions with Dusty show that Cecie is also quite caring, having looked after him whilst he was separated from Kat.

She is incredibly shy, and has a hard time expressing herself (as indicated by her dialogue, in which she appears to stammer quite a bit). She gradually becomes more vocal about her feelings and eventually taking initiative, best demonstrated by coming up with the idea to use explosives to blow the bridge out to slow Neu Hiraleon's rampage in Episode 11, then by transforming into her Durga Angel form at will to assist Kat against the Destructive Force, and in the epilogue, taking care of the Banga Settlement whilst Lisa is away.

In many ways, Cecie looks at Kat somewhat as a role model, valuing her for her optimism and strong will, and she remains loyal to her throughout Gravity Rush 2. After the final battle, when Raven pays her and Lisa a visit, she proclaims that being strong and positive is something she has always wanted to be, referring to Kat's own character traits.

Cecie initially has no control over her ability to transform into her Angel form, but after Lisa's attempts to reach out to her causing her Durga persona to erode away completely, she learns to control it, and her personality as Cecie is retained thereafter.

Cecie makes an appearance in every episode in the Banga and Jirga Para Lhao chapters barring the ninth episode, And the Soldier's Wife?. From there, she will appear in the following episodes: 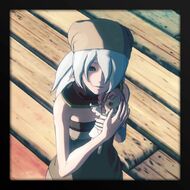 Cecie as she appears in game, holding her Angel doll.