Kat carries out her days as Queen Alua, until a melody from a long lost box guides her to Dusty and Raven, who have been imprisoned in the palace. Kat is about to discover a secret past shared between Chancellor Xicero and the mysterious Alias.

Castle of Sand is the twenty-second episode of Gravity Rush 2 and the second episode of the Eto chapter. New characters such as Cai and Xicero are introduced, as is Bit's true form. Kat's real name, Alua, is also revealed in this episode.

...Kat reawakens to the sound of a familiar tune playing via music box, only now as her past self: Queen Alua. She tries to readjust to her past life by reading books in her study and attending royal audiences, where she sits on her throne and discusses political matters with the Senate, but would rather do anything else such as explore the castle grounds. Queen Alua gets a strange feeling that she is forgetting something, but can not figure out what. As the days pass, she starts finding mysterious objects in her bedroom; she finds a key by the open window, and her attendant hands her a piece of paper belonging to a diary (separate from the one she writes in every night) that was on the floor. After the third day, Queen Alua uses the key to unlock her desk draw, revealing the music box, which is unfortunately broken.

Queen Alua is stirred from her slumber by the voice of Alias and the repaired music box, and she investigates the strange room that was guarded across the hallway. She discovers that the room is actually a prison covered in ice when she finds Raven shackled up and Dusty and Xii locked in a small cage, and she ditches the Queen's wardrobe, and thus breaking the brainwashing she was under. Seeing her friend in pain from the low temperatures, Kat vows to find whoever is behind this whole thing. As she leaves Raven's prison chamber, Kat hears Chancellor Xicero talking to someone, who turns out to be Alias. Curious as to how they known each other, Kat tails them to the throne room in an attempt to eavesdrop on their conversation, with Alias dropping subtle hints to his true identity.

After following Alias and Xicero to the throne room, the two discuss overthrowing the king, who just so happened to have overheard their conversation. King Cai orders Wolp to attack Xicero, however, Alias defends him and gets broken apart, and Wolp goes for a second attack that results in Xicero getting mortally wounded. Kat tries to intervene but is shrouded in black mist, while King Cai makes a run for it. After fighting her way through hordes of white Nevi ordered by the king, she tries to comfort the dying Xicero (who expresses regret over something he did to her 100 years ago), but before she can do much else, Bit appears behind her, and takes her away to a strange dimension...

Meanwhile, Cai is in a prison chamber where a giant crystal with a person inside it rests. Reprimanding the people who were afraid of her power, he releases what is actually the demigod, Elektricitie to unleash hell upon the world. Her first target: Hekseville.

Start off by examining everything in Queen Alua's bedroom for a book with a page torn out, then head to the throne room to attend the royal audience. Throughout this part of the episode, your control is somewhat restricted, and room for exploration is extremely limited. After the second day, there is a key underneath the open window.

You'll be given a piece of paper the next morning that fits the missing page in the book you read earlier, so examine that book again to get the full story within. Before going to bed, use the key you found to unlock Alua's desk. After going to sleep, you'll be awakened in the middle of the night. Head over to the room across the hallway and interact with it.

After a comic strip, follow Xicero and Alias to the throne, but keep your distance as you go. Upon coming out of a cutscene, fight off every Nevi that appears until another cutscene is triggered. 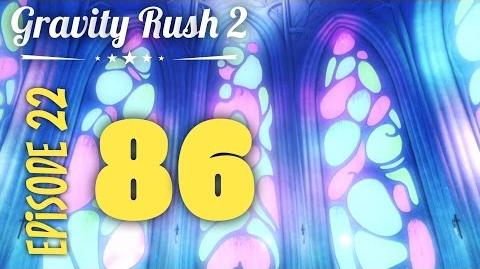 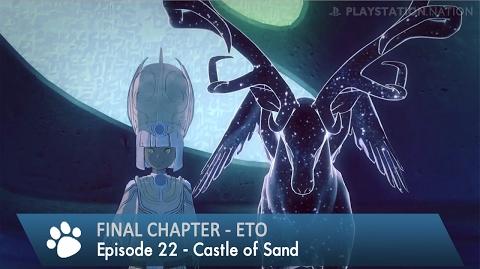 Gravity Rush 2 - Final Chapter - Episode 22 - Castle of Sand
Add a photo to this gallery
Retrieved from "https://gravityrush.fandom.com/wiki/Castle_of_Sand?oldid=16303"
Community content is available under CC-BY-SA unless otherwise noted.