Swallow in the Mirror

Before she has a chance to clean up her old home, Kat is forced to leave by law. While searching the city for a new home, she discovers an older gentleman who is having problems with his airboat and agrees to take him on a trip down memory lane.

Carefree Gentleman is the fourteenth episode of Gravity Rush 2 and the second episode of the Hekseville chapter. Dr. Brahman is introduced in this episode.

Upon entering her home, Kat is shocked and angry at the fact that her home is filled with trash. Lying in her bed, she ponders on the reality of how different Hekseville is as well how out of place she is. While she finds her bed infested and herself itching, a police officer approaches her home and apprises her that she should not be there. Though she claims this is her home, the officer informs her that no-one is registered to live in that pipe and that if she does not leave, she will be arrested. Wondering about where she will live now, she heads to the train station to gather information on places to live.

At the train station, Kat asks the employee there for accommodations, to which he asks her for her citizen registration code. As she has no code, though, the employee cannot help her. While she is upset with the registration system, the employee tells her that it is a responsibility that the citizens have to cope with in order to keep the city safe. As he sees her in a tough spot, he "recommends" Endestria, informing her that citizens can live there without a citizen code. She then decides to head there using the train station. While on the train, she feels nostalgic as she thinks back to past events, such as when she rode the same train to Pleajeune and saved the missing parts of towns from the gravity storms.

Now in Pleajeune, Kat unfortunately discovers that the trains do not travel to Endestria. Wondering why, she asks a local nearby, and he informs her that the line to Endestria was cancelled years ago. As she tells him that she was recommended that place, he also tells her how that place is a wreck and only vagrants and criminals live there. Briefly seen upset at what the prior employee told her, she heads to Endestria on her own.

Though Kat is shocked to see the state Endestria is in, she tries to find a place to live; first she tries a place under a water tank, but a man is already living there. When Kat asks him if there is room for her, he requests a hand written "Statement of Purpose" and a resume, which is to be given to him the following day, as well as morning and evening activity reports. Overwhelmed, she decides to keep looking for places to live instead. Failing to find anything at the west-side of the city, the train station and the old housing block above it, where she was also attacked by Nevi, she is content with the platform holding the district's old warning beacon, although she soon comes to find a man and his broken down airboat down below. The man tells her how he was going visit several places that he use to go to with his daughter, since it is his day off. Thinking to herself, she notices he was speaking about his daughter in past tense and senses his loneliness deep down, despite trying his best to smile. She then asks where he was going to go first, to which he tells her a crêpe shop in Pleajeune, and out of kindness she decides to take him there.

At the crêpe shop, Kat suggest waiting in the long line for him so that he can go and visit the other places he wants to go. He thanks her but before heading off, he asks her a deep question regarding whether she places more faith in "destinies", "miracles", or "foresight". After getting the order and through the help of some locals, she eventually she finds him sitting on a bench behind Hotel Fauxneu, which is another location him and his daughter use to visit. Anxious, he asks her if she has an answer to the question from earlier. When she answers "destiny", he goes on about how all things are meant to be by nature. He then lets her know that there was another place he wanted to visit—Arquebus Academy. After she stealthily escorts him there, as he has an "aversion" for the police, he asks her another question that is what does she considers the most important thing in life. As she answers "justice", he, again, gives his philosophical take on the given answer. He then makes one final request that is for her to take him to the Ferris Wheel. After she makes another stealthily escort to it, he asks her one final question that is what time is the most important to her; when she picks "the past", as he has done both times before, he expresses his perspective on the matter. Suddenly, a man familiar with the gentleman Kat is with appears and calls him out, revealing him to be Dr. Brahman. The other man is revealed to be Addica during a brief conversation, before they take off in an airboat.

Later, somewhere in the ruins of Endestria, while Kat is moping on how her life had fallen to this point, a Grigo approaches and apprises her that her citizen registration has been processed. She then heads back home; all cleaned up, she finds a new bed and a letter on it from Dr. Brahman thanking her for having helped him and showed him compassion. Suddenly though, she is startled by an order to show herself; said order came from Syd's old partner, Chaz—he welcomes her back and explains that he had to visit the pipe house after seeing a weird entry in the Grigo patrol logs. When he asks about Syd, Kat then informs him that only she was able to make it back, while he, as well as Raven, are back at a place called Jirga Para Lhao, along with new people they all met. After being notified on his radio to head back to the station, which is how Kat finds out about Chaz's promotion to lieutenant, he heads back to Vendecentre, where the new police headquarters is.

First, head to Auldnoir station and talk to the station master; he will suggest that you ride the train to Endestria. Once you reach Pleajeune however, the train will head back to Auldnoir, so jump off the train, and talk to a man standing on the platform. Head to Endestria by shifting, and you'll be tasked with searching for a place to live (one instance will involve fighting Nevi).

Eventually, you'll stumble upon a sharply dressed gentleman beside his wrecked air boat; this is Dr. Brahman. Use Status to take him over to Pleajeune's statue outside the school. You'll be waiting on line for a bit, but there are 2 questions you'll be asked: answer as you see fit, since their impact is pretty negligible.

Soon you will need to find Dr. Brahman; head over to the Ferris Wheel where another suited man will talk to you. Brahman is on the other side of the Ferris Wheel. Now, police will start patrolling the district, and you need get Dr. Brahman over to Arquebus Academy undetected. Best way to go is right down to the same level as the train track. Head back up to street level when Brahman tells you it is safe to do so.

Use the tracks to get back to the district centre as you did before undetected to complete this episode. 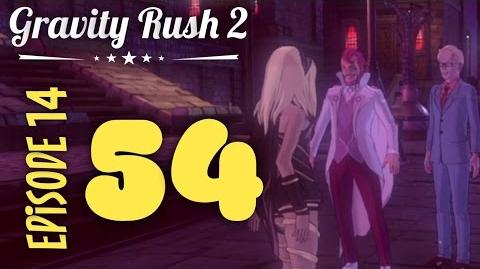 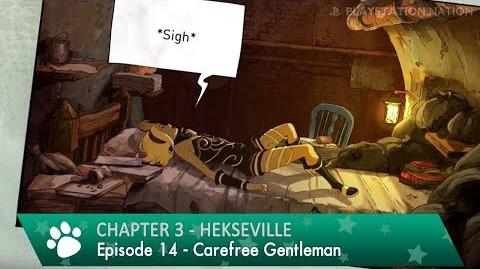