Kids Just Don't Understand
The Lost Tribe
Children of the Past

Boutoume, also known as the City at the Edge of the World, is a location featured in Gravity Rush. It is the village far beneath Hekseville, at the bottom of the World Pillar. It was inhabited by the Lost Tribe and home to the Ark.

Note: As of Gravity Rush 2's DLC, Raven's Choice, the following events have been wiped from history since it was rewritten so the bus crash never happened in the first place.

The village was originally occupied by an ancient civilization before the Lost Tribe. At some point, though, they left the village behind, including the Ark they built that was presumably designed to transport them out of the village.

A group of children on their way to school in their school bus had an accident which sent them down below the city of Hekseville, where they landed in the village at the edge of the world, Boutoume. Stranded, they relied mostly on the food that was being carelessly tossed over the edge of Hekseville by its residents.

Kat fell down to Boutoume after Nushi destroyed a platform that she was standing on outside the World Pillar, which she had ventured down. While knocked out, the Lost Tribe put her inside the spherical cage that resides there. When Cyanea fell asleep on watch, Kat escaped, but she saved the children from a Nevi invasion shortly after.

After they rested, a Nevi named Nushi, who had harassed the children before, attacked the village. However, after Kat and Raven worked together and used the environment to their advantage, they were able to lead it away.

Later, Raven planned to use the Ark that was left behind by the ancient civilization to save the lost children, while Kat went off with Cyanea to another world in order to find her own way of saving the children. After Kat came back, she found the entrance to the Ark with her newfound vision power and activated it. Although Nushi reappeared again in order to stop everyone from leaving, Kat used her new power and seemingly defeated it. Then, Kat and Raven piloted the Ark, with the children inside, out of the village. However, a still alive Nushi catches up with the Ark and tries to throw it off course, in turn causing Kat to fall.

Being at the edge of the World Pillar, Boutoume's environment is dark and gloomy, with a sense of spatial emptiness between the many roots, most of which sprouted flowers from the exterior, born from the World Pillar and spread all throughout. Side branching roots—some containing spores and stalactites underneath, the former of which Raven used against Nushi—can be seen connecting to the vertical roots, which are utilized as bridges for accessibility to other sections of the village.

The village itself is supported by multiple roots and consists of a crane and cage, which the Lost Tribe had used to contain Kat in, and a recently disabled cable car that was previously used by the Lost Tribe (and the past civilization) in order to get from the center of the village to Zaza's bus house. Huts, which are planted at low and high altitudes were used for shelter; thick wooden planks, which were reinforced against the central root on the southern side and used to climb up and down to the different layers; and man-made bridges and platforms, which were used to get to other areas, are found in the village also.

Below the village is nothing but a black ocean, which is where Nushi resided. The black ocean is also continuously rising; it will eventually consume Boutoume, in time, if it has not already.

The southern end of the village. 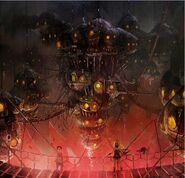 Concept art of Boutoume.
Add a photo to this gallery

Retrieved from "https://gravityrush.fandom.com/wiki/Boutoume?oldid=16351"
Community content is available under CC-BY-SA unless otherwise noted.