Starts as you approach the Lost City

Syd manages to break through the Lost City's outer shell. Kat heads inside and obtains Jupiter Style gravity shifting powers, which helps her and Raven reach the monster city's power source: a gravity engine, which is out of control.

Black Eagle is the twelfth episode of Gravity Rush 2. It is the last episode of the Jirga Para Lhao chapter.

...Kat and Raven use the photograph of Neu Hiraleon's landmark to locate it within the wreckage to use it as an entry point, which isn't easy since the city's layout is completely unrecognisable, in turn making the landmark harder to find. They soon find the monument, and Kat fires the flare gun for the Bismalia to blow a hole in the city's outer shell. Once inside, Kat and Raven are once again presented with tasks given by the mysterious tablets.

Not too long after, Kat gains access to another new gravity style: Jupiter style. The increased weight evokes complaints about feeling heavy from Kat and sarcastic remarks from Raven. Soon, Raven strengthens Kat's Surge Kick to break through a wall that Kat can not get through on her own, revealing an opening to the outside. However, they watch in horror as a section of the Bismalia is smashed by a part of the Lost City, presumably killing Syd. Rather than fearing for Syd's life, Raven insists that they carry out his plan as it is what he would have wanted.

The two navigate the narrow and winding hallways (some of which start to close in on them) until they reach the core, only to find a doll on the ground that belongs to Cecie, who herself is bound inside the Gravity Engine's mouth. With the engine soon destroyed, the skies outside clear, but Raven discovers strange crystals covering Cecie's face. Before anything else can be done, she is dragged through a rift along with Raven, leaving Kat to be sent through a separate rift, where she is greeted by Gade and Cyanea. They explain to Kat that their powers are weakened by previous events, hence why they were not of much help to her at any time prior to this point. With only a brief mention of a third creator, they open a rift for Kat to enter, which sends her back to Hekseville the same way her journey started—awakening in the slums of Auldnoir...

WARNING: There is a bug where Raven will disappear, halting progression when you get to the wall where Raven is needed for the Double Surge Kick. If this happens, simply reload the save file.

This episode is pretty tough, as you will spend more time fighting the camera than anything else due to how unruly it is in enclosed areas. Once again, you are given various challenges by the mysterious stone tablets, most of which involve killing large numbers of enemies (upwards of 20), while others consist of a mining and gravity sliding. Soon, you will acquire the Jupiter style, allowing you to use Debris Ball, Surge Kick, and Micro Black Hole to complete the challenges before you.

Follow the remaining hallways as they start to close in on you, until you reach the core and trigger a cutscene. Up next is a boss fight against the Gravity Engine.

Once the battle starts, it will be able to use two different attacks: an energy-beam and multiple energy-based projectile spheres. Both attacks are telegraphed by emitting particles before they launch. However, the energy spheres have tracking properties that are difficult to avoid normally; additionally, the energy beam can be fired at Kat directly upon launch, and it has a (limited) range of travel effect of roughly 180°.

The first thing to do is to destroy its two cores resembling eyes. Since Raven is part of the fight, the monster's attacks will not always be centred on you; there will be times where you won't take damage at all. When Raven is targeted, use this to your advantage by taking out the two cores. Also use the environment to your advantage, as it is littered with debris usable for Kat's Debris Ball attack. When one core is taken out, Nevi will appear on the ground (the side and back areas), but they will not bother you unless you approach them.

When both cores are taken out it will start using a new attack: a mass-scattering of suspended mechanical spheres; they shoot out laser beams that connect to other spheres to form multiple line traps, which is capable of orbiting the monster. Also after its two eye-like cores are destroyed, one of the multiple pipes will be seen with cores inside, which contains either a pair of or set of cores. Only one pipe has a singular core near the perimeter.

Same rules apply regarding the aforementioned Raven and environmental use strategy. Its new attack is easily avoidable if you stay near the perimeters of the room; the attack is generally catered towards defending the monster from assaults on its pipes in the air and its main core. Thus, when attacking the cores in the pipes, you do not want to attack them while that trap is active, so instead wait for the spheres to disappear after use. The monster can near-never attack you from behind itself, aside from when it uses that trap attack, as that is its blind-spot. When all cores in a pipe are destroyed, the monster's true core on its head will be exposed for a short time. How ever many times it takes, you will have to repeatedly break the pair or set of cores in one of the various pipes in order to expose its core and defeat it. Also be wary of Nevi that start to appear in the front section of the room as the monster's health gets to halfway point, as they can blind-side you if you're not careful.

As with other bosses, once its health bar is depleted, finish it off with the signature (team) finisher attack. Failing to do so in time will result in the core concealing itself, in which you will have to destroy the pipes again (unless you destroyed all the pipes it had, in which you will just have to damage its main core until its health depletes again). 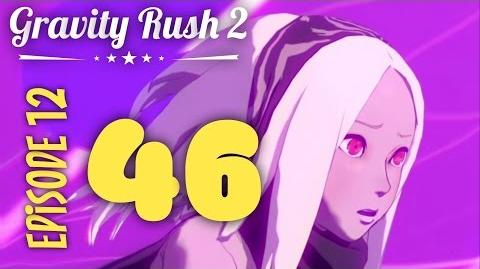 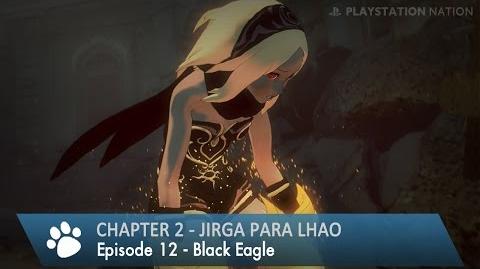 Retrieved from "https://gravityrush.fandom.com/wiki/Black_Eagle?oldid=16209"
Community content is available under CC-BY-SA unless otherwise noted.