Dream Doll, Angel Doll
Fly Me to the Storm

Banga is a travelling settlement of mining boats that is led by Lisa. It is a featured location in Gravity Rush 2, serving as the primary setting for the game's first chapter. It is also the location in which both Kat and Syd end up at the end of Gravity Rush - Overture.

After Kat, Raven, and Syd are pulled into a gravity storm at Neu Hiraleon, Kat and Syd find themselves taken in by the citizens of Banga, where they are put to work mining ore. The work is difficult and dangerous, and the living conditions are unpleasant; Kat sleeps in the settlement's bird coop and must earn her ration of food every day—since, as Lisa and the other residents are fond of saying, "a lazy worker is a hungry worker." This is to encourage the workers to pull their weight while mining lest they want to starve for days on end.

After several ventures into various mining sites and a few difficult dealings with Vogo, the settlement makes its way to Jirga Para Lhao to restock its supplies. Shortly after their arrival, Lisa discovers a crack in the settlement's gravity engine, which forces them to extend their stay.

When Lisa, Cecie, and Syd are captured and imprisoned by the Council, Banga is left without a leader for a short time; however, Lisa is freed by the council in exchange for handing over the miners' technology, and the Garrison sets up a patrol within the settlement itself.

After Kat and Raven return from the Candle Zone as part of a bargain with the Council (who didn't uphold their end), Vogo explains that all of Banga's citizens are to be sent to work in the mines. When they return to Banga, however, they discover a newly galvanized (and now shorter-haired) Lisa, who declares her intent to rise in revolt.

Once the council's power is stripped in Episode 10, No Messiah, No Message, Lisa becomes the leader of Jirga Para Lhao, making Banga a permanent fixture of the city. When Jirga Para Lhao and Hekseville are brought together in the final episodes of the game, the Banga Fleet occasionally visits Hekseville either for business reasons, or if Lisa has leadership duties in the city. When Lisa is away from Banga, Cecie has looked after the settlement in her absence.

Living expenses are always are major concern within the village; they require high quality ore from the mines to sell on to merchants in order to sustain themselves. They are clearly on a very tight budget, as hinted by Lisa's fury when Kat and Syd damage two of the pressure suits used for mining. Vogo throws a spanner in their livelihoods when he tries to change the contract terms to make their jobs a lot harder than needed. The Banga Fleet cannot afford to gather low grade ore with impurities, given the terms they have been given.

After one of the windmills takes severe damage during Kat and Raven's fight, Lisa in particular grows more and more worried about the settlement's living expenses. She becomes even more concerned about their food budget when Raven eats the large meal which Lisa had prepared for the entire fleet. The fleet's poor economy are the most probable reason why Lisa starves her workers if they don't pull their weight. 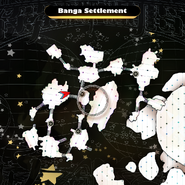 Map of Banga. To the right is the area called the gravel pit, later revealed to be Toflug Reef. 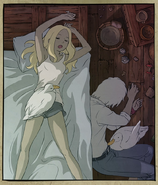 The bird coop in which Kat and Syd sleep at the outset of the game.

Retrieved from "https://gravityrush.fandom.com/wiki/Banga?oldid=16401"
Community content is available under CC-BY-SA unless otherwise noted.