Another Story: The Ark of Time - Raven's Choice

Edit
watch 02:50
"Gravity Rush" Lore: Another Story: Raven's Choice
Do you like this video?
Play Sound

Another Story: The Ark of Time - Raven's Choice

The player will play as Raven for the story's duration. The DLC centres around the events following the first Gravity Rush, as Raven tries to awaken the lost children from the Ark.

Once downloaded, it becomes available to play from the main menu, unlike the DLC's in the previous title. The DLC should take players anywhere between 2 to 3 hours.

The story starts with Raven and Kat trying to obtain a sufficient amount of energy from Nevi in order to awaken the lost children inside the Ark, which had made it to Hekseville at the end of Gravity Rush. Raven is approached by both Gade and Cyanea with concerns about the upcoming experiment of Dr. Brahman. Once he commences the experiment, a boy warns him that the experiment will not give him the results he is looking for. Despite the warnings, he begins the experiment, but then the Ark suddenly destabilizes, causing Raven to panic. She attempts to stop the Ark, but is sucked into a wormhole.

Raven awakens as her younger self, Sachya, in a mysterious location called The Labyrinth, where forgotten memories are preserved. Sachya is told by Bit (the same boy who warned Dr. Brahman of the danger earlier) to gather her lost memories before the Collectors eat them, in order to repair time and space, informing her that she is part of the solution. After gathering her childhood memories, Raven is reunited with her guardian, Xii. She then guides an illusion of Zaza to the safety of the Ark, assuring him that it will save him.

When Raven gets back to Hekseville, she is horrified to find the world she knew is stuck in a frozen time state. However, Kat's companion, Dusty, is not affected, and he leads Raven to Kat, who is frozen in time in front of Vendecentre's train station. Bit informs her that the problem is much bigger than he expected, and that Raven will need the elements of Light and Dark and to send them back to the Ark in order to repair the universe. The keepers of the elements just so happen to be Gade and Cyanea, respectively. Cyanea takes Raven to a rift plane called "Illumina" where light and dark reside.

Here, Raven must make the Light and Darkness take on physical forms. To draw them out, Raven needs to take over "territories" from the opposing side. After summoning Lumino of the Light, Raven is challenged to a fight which she comfortably wins. After summoning and defeating Tenebria of the Darkness, Illumina starts to collapse and Raven escapes with aid from Cyanea and Gade.

However, Lumino and Tenebria won't go down easily, and they re-manifest in their physical forms with their own goals. Bit orders Raven to recover the last of her memories, which seem to be related in some way to Kat. As Raven collects the last of her memories, unleashes her inner power to unlock her Phoenix Mode, which allows her to comfortably defeat both Lumino and Tenebria, and seal them into a glowing orb that will be used to send the Ark back its original resting place.

Unfortunately, Bit's plan has not gone unnoticed by the Collectors, as they suddenly invade Hekseville in an attempt to destroy the Ark. Though Raven is able to hold them off for a while, a huge swarm of Collectors merge together into one giant monster that will destroy the Ark. While the Giant Collector tunnels the Ark, the small fry are attempting to purge Kat from existence. Luckily, Raven distracts the beast and lures it over to Kat. She eliminates the smaller Collectors, preventing Kat from being purged. With the help of both Xii and Dusty, Raven transforms into the upper half of a Sphinx to destroy the Giant Collector. She, along with Bit, return the Ark to its resting place.

With the Ark put back, Bit informs Raven that two more things need to be removed from existence. One being the bus accident that happened over 50 years ago, concluding that if the accident never happened, the Ark would have never been needed. The other thing is "Sachya." Believing that Raven was never meant to be born as Sachya, he gives her a choice to essentially sacrifice her memories, to which Raven accepts without hesitation, not wanting Zaza or the other children to live a life of suffering as they had been. Raven catches the bus with stasis which in turn prevents the accident, thus rewriting history.

When Raven awakens, she is approached by Kat, who notices that her best friend is looking sad for some reason. Raven then meets two small children who drop a bunch of flowers; the kids introduce themselves as Zaza and Sachya. Sachya explains that Zaza was named after his grandfather, while she was named after an imaginary friend her grandfather once had, obviously the same Zaza from Raven's now forgotten childhood. As the kids leave, Kat sees a tear in Raven's eye, prompting her to ask if she's okay, only for Raven to simply answer: "I think I'm fine..."

There are only six episodes in Raven's Choice. 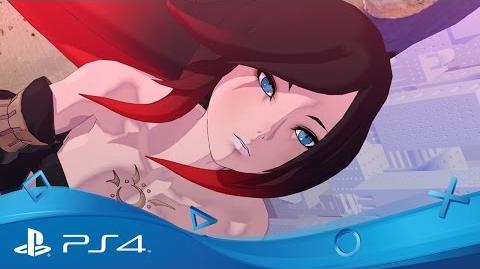 Gravity Rush 2 PSX 2016 Trailer ‘The Ark of Time Raven's Choice’ DLC PS4
The announcement trailer that was shown at PSX 2016.