Kat enters a dangerous rift plane as part of a deal to free the hostages. She discovers the Lunar Style gravity shifting powers and reunites with Raven. In the depths of the rift plane lies the government district that vanished from Hekseville so many years before: Neu Hiraleon.

And the Soldier's Wife? is the ninth episode of Gravity Rush 2 and the fifth episode of the Jirga Para Lhao chapter.

They enter the rift plane shrouded in darkness, with nothing but stone candles lighting the way. They stumble upon more stone tablets giving them instructions on how to progress. Soon, they spot an emergency flare, indicating survivors. They discover only one injured soldier; everyone else was killed either during the ship crash or by Scarabs that had ambushed them prior to Kat's and Raven's arrival. Raven opts to take the soldier back to the Garrison forces, while Kat heads deeper into the rift plane.

Shortly after, Kat finds another stone tablet and some strange artifacts of sorts; they attach themselves to her, granting her a new power: Lunar Style gravity shifting. From there, she uses her new abilities in this gravity style to locate the crash site, while also completing the tasks given by the tablets. Kat soon discovers that in the deepest parts of the rift plane, lies Neu Hiraleon, the same place that was swept away with Kat, Raven, Syd, and Cecie some time ago prior. Kat finds the crash site, and she and Raven recover the recordings, but they are startled by an unidentified dark entity and then ambushed by Scarabs.

After fighting them off and destroying a new giant Scarab resembling a whale of sorts, the rift plane starts to collapse. Kat and Raven manage to escape through a rift-hole, though not without landing on a small squad of Garrison soldiers. When they pay Vogo a visit, he informs them that the Council had, rather than releasing the hostages as agreed, sent everyone in the city except those in Lei Havina to work the mines. As Kat and Raven try to control the Scarab outbreak, Lisa has a different plan: revolt against the Jirga Para Lhao council.

In the episode, you will be completing the challenges given to you by the mysterious tablets:

Defeat the Scarabs attacking the soldier, then go and talk to him. Shortly after this, you will gain the Lunar shifting style, one of the new mechanics of Gravity Rush 2. Continue forward to start the next lot of tablet challenges, which will introduce you to the mechanics of Lunar Style.

Once Neu Hiraleon is located, find the crashed ship. At this point, Raven will rejoin you. Fight off every Scarab in the area, but you are stuck in Lunar Style, so use all the moves you have learned to defeat them. A giant Scarab will then appear, but this one spawns sacrificial Scarabs that explode when close enough to Kat to do damage to her. Use the stronger, charged Vortex Field to defeat it faster. You'll then need to flee to collapsing mining site by heading towards the rift-hole in the sky, but you cannot go directly to it. Follow the markers and watch out for nearby enemies. 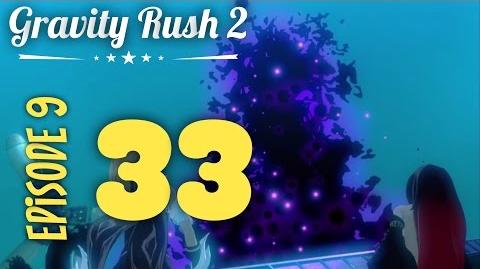 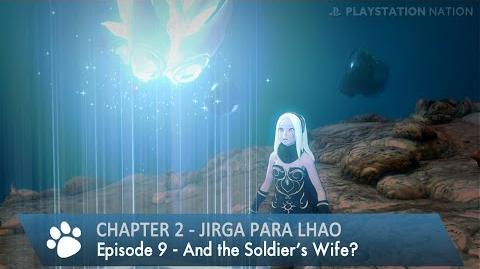 Gravity Rush 2 - Chapter 2 - Episode 9 - And the Soldier's Wife?
Add a photo to this gallery
Retrieved from "https://gravityrush.fandom.com/wiki/And_the_Soldier%27s_Wife%3F?oldid=16165"
Community content is available under CC-BY-SA unless otherwise noted.