Kat returns alone to Hekseville, which is now a very different place from the one she left. Her old house in the pipes is wrecked, and her old friend, the fortune teller, has disappeared. She has no time to find her, however, as a gravity storm erupts in the middle of the city.

Alone Again is the thirteenth episode of Gravity Rush 2. It the first episode of the Hekseville chapter. The episode also introduces purple tinted Nevi as well as a new character: Kali Angel.

Upon awakening in the slums of Auldnoir, the first thing Kat does is check on her old home in the sewers, only to find it being used as a dumping ground. She then decides to visit Pandora's Fortunes, but she instead finds a strange black building in its place, along with some odd robotic devices known as "Grigos". After asking around for answers without no results (with some kids threatening to call the police on her), Kat decides to grab something to eat from the stalls by the fountain. However, her food is quickly snatched by a bird, so she gives chase.

Just as her snack is eaten by the bird, a gravity storm erupts overhead, so she tries to fight it instead of worrying getting something to eat. After a while, more strange drones (called "Bubs") absorb the energy from the storm, then a Nevi suddenly appears and tries to attack Kat; however, she is saved by Hekseville's new guardian, Kali Angel. The two battle the storms overhead, and they take out all remaining Nevi.

While Kali receives all of the praise from the townsfolk, Kat is shoved aside by some boy, who turns out to be Eugie. Now grown into a teenager, he, along with his father Aujean, quickly recognize her and welcome her back after a three year absence (to Kat's surprise). With help from his son, Aujean tries to tell Kat that she is not relevant anymore, but they do tell her that Pandora's Fortunes was relocated to Pleajeune, so Kat heads over there to find her old friend, Aki.

When she arrives, she sees Newt and Echo just leaving the place. Kat learns that Echo is carrying Newt's baby and that they are now married. They visited Pandora's Fortunes to find a name for their baby, and they fell in love with the name they were given immediately. As they leave, Kat heads inside to find Aki. After a brief catch up (Kat concluding that Aki moved her business mainly for financial gain), she leaves, since Aki has a customer waiting to see her.

First, head to Kat's home on the other side of the wall from where Kat awakens. Next, head up above the city where Pandora's Fortunes used to be. Ask around for info on what happened, specifically talking to a middle-aged man, some kids with a dog, and a Grigo. Next, go to the stalls near the fountain to get a snack from one of the vendors. Chase the bird around town, until it rests of a roof.

Gravity storms with giant hands will appear over town, along with a bunch of Nevi spawning with them. You are introduced to enemies with a purple tint to them; these are more aggressive and stronger enemies, so watch yourself around them. You will need to defeat the giant hands to rid the storms, before defeating the remaining Nevi. Once that is done, head to Pleajeune to find Pandora's Fortunes in the area by the Ferris Wheel.

Once you finish this episode, you can visit Pandora's Fortunes any time to merge, morph, and recycle talismans. 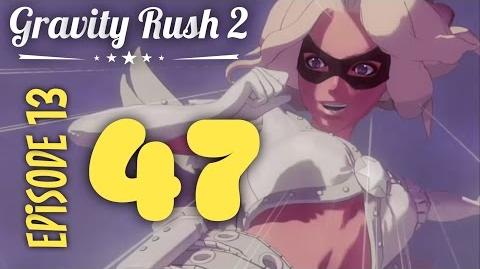 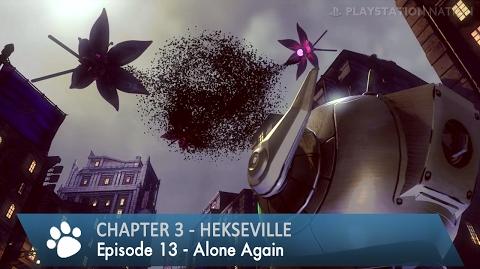