Elektricitie brings terror to Hekseville and destroys the forces led by Yunica and Permet. With Bit's help, Raven makes a hasty return to face down Elektricitie and appears to have some success, until things go wrong.

While Kat is piecing together her forgotten memories, Raven returns to Hekseville to confront Elektricitie. She is assisted by the Rebels, particularly Yunica and Permet. Shortly, however, Permet is soon struck by lightning and taken out of the fight. Soon after, a bolt of lightning strikes the Vendecentre clock tower, which almost crushes the rebel commander, Yuri Gerneaux, had Yunica not been there to destroy the falling debris. Both are quickly killed (seemingly), however, when a lightning blast decimates Yunica and knocks Gerneaux unconscious.

Seeing her comrades defeated, Raven almost gives up under the belief that she is not strong enough to save Hekseville, until she hears Kat talking to her through Xii. This gives Raven a new spark of hope, and she uses her Phoenix form in a last effort to defeat Elektricitie. Despite her valiant efforts, it is not enough to stop Elektricitie, and Raven collapses, exhausted from fighting (and the icy prison she was kept in prior). The Creators look on over the destruction, lamenting their decision to interfere with the events and knowing the consequences of doing so. With one last goodbye, Gade sacrifices himself to return Kat to Hekseville, and she is horrified by the death and destruction she sees before her. When she finds Raven's lifeless body in the distance, she hurries over to hold her fallen friend in her arms but is then mocked and taunted by a deranged Cai. Kat however, does not take it kindly...

You will be playing as Raven for the duration of this episode. Make use of all of Raven's powers to fight Elektricitie, but be careful when she generates her electrically charged shield, as touching it can do a lot of damage to you. You can knock the shield out using the un-detonated missiles (that were previously used against the Nevi) lying nearby. Raven's Blood Talon (her version of the Gravity Kick) can fill the SP gauge quickly, so use her Blue Jays in conjunction with Stasis Field to deal heavy damage to Elektricitie. After a cutscene, Raven will go into Phoenix Mode, increasing damage output and speed. Be wary when Elektricitie uses her shield though; getting too enthusiastic with your attacks is a sure way to get Raven killed very quickly. Keep attacking until you get the finishing move prompt. 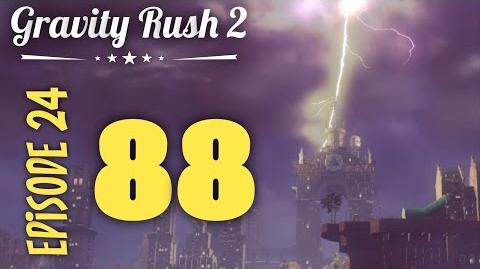 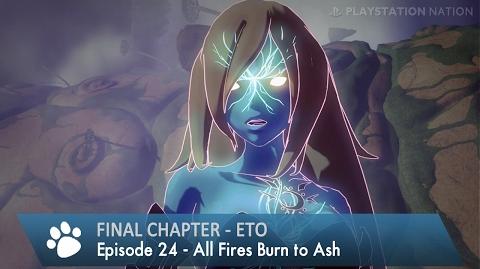 Retrieved from "https://gravityrush.fandom.com/wiki/All_Fires_Burn_to_Ash?oldid=16256"
Community content is available under CC-BY-SA unless otherwise noted.