Faced with a demon of enormous size, Kat is about to lose all hope when a song from the city's people reaches her ears. Syd is brought back to life through Bit's sacrifice, and his presence helps her return to the fight.

A Song without Voice is the twenty-sixth and penultimate episode of Gravity Rush 2 as well the sixth episode of the Eto chapter.

Bit witnesses the Destructive Force reveal itself to the world, but he believes there is a way to help Kat defeat it, as he is saying to a man in a pinstripe suit. When the game cuts back to Kat, she is seen getting beaten up by the Destructive Force. She sets out to destroy the harbinger of destruction, but soon realizes she is fighting an impossible battle as the Destructive Force regenerates its cores each time she breaks one. Eventually, Lisa arrives to assist, piloting the Bismalia and accompanied by an army of reformed Garrison troops to help. Despite the backup, the Bismalia is soon shot down, presumably killing Lisa. The Destructive Force then starts to sap Kat's powers bit by bit. Cecie, fearing Kat's demise, shows up and uses her Durga persona (now having full control over it) to crystallize the monster long enough for Kat to do some damage to it.

Unfortunately, the demon breaks free and swats Durga aside, and it continues to drain Kat of every last bit of power she has. Eventually, Kat is left close to death, but the Destructive Force offers Kat a chance to forget the fight while allowing the destruction to continue, to which she refuses. With Vendecentre strewn with death and destruction, Kat soon hears the townsfolk sing a reprise of "A Red Apple," encouraging Kat to finish what she started. Through the sacrifice of Bit, Syd is resurrected one final time and commands a swarm of Nevi to stall the demon long enough for Kat to regain her senses. Kat regains all of her powers, and she merges with both Dusty and Xii to transform into the whole Gryps and then summons countless panthers and phoenixes to weaken the Destructive Force severely.

With the Destructive Force weakened, Kat and Syd share one last goodbye together, and Kat leaves to create and become a singularity to seal the monster away for good, now having accepted her past and her promise made as Alua now fulfilled. Afterwards, a battered and beaten Raven awakens to the sound of Kat's voice (which she hears through Xii), uncertain of what went on around her.

This boss has regenerative powers. Attack its cores as often as you are able to, and switch to Jupiter Style when it starts unleashing gusts of wind. Don't concern yourself with actually trying to defeat it, as it will continuously regenerate health as you attack it. As the fight draws on however, it will gradually strip you of your powers; first you'll lose the special attacks as well as the Lunar and Jupiter Styles, then Stasis Field. When Cecie shows up and immobilizes the Destructive Force, attack its eye. Afterwards, Dusty is lost (and thus, all Gravity powers), and your health is reduced to base level. The boss will drain Kat one last time, leaving her on the verge of death. After a cutscene plays, just slowly inch forwards towards the boss and touch the DualShock 4 touch pad to finish it off once and for all. 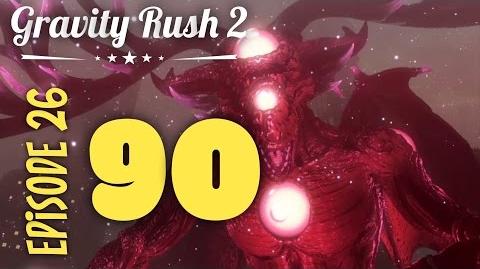 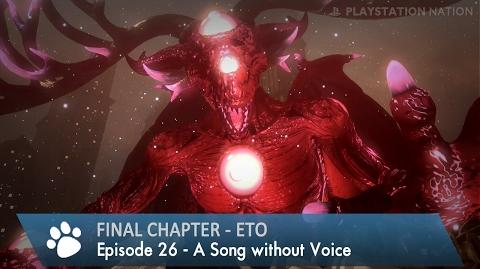 Gravity Rush 2 - Final Chapter - Episode 26 - A Song without Voice
Add a photo to this gallery
Retrieved from "https://gravityrush.fandom.com/wiki/A_Song_without_Voice?oldid=16148"
Community content is available under CC-BY-SA unless otherwise noted.